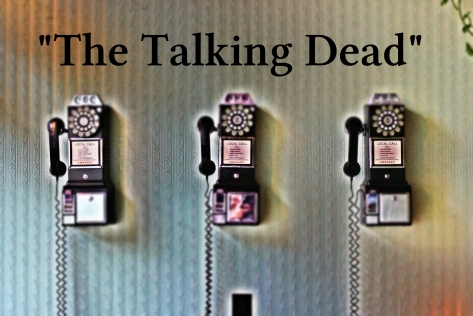 Please forgive the undercurrent of snark, as I discuss the “Talking Dead” who live among us…

Last week, 4 different friends posted versions of the old meme, “Aren’t you glad we did THIS instead of THAT,” referring to pictures of being outside playing instead of on their devices when they were younger. I know you’ve seen these memes; most of them have children smiling as if the dentist just administered a quadruple dose of laughing gas and then catapulted them out the window – banished to stay there until mom hollered for them from the partially-opened front screen door. According to the nostalgic memes, no one ever stayed indoors. Evidently, we were too busy enjoying the splat of mosquito bites, Michael Jackson wannabes offering us candy from the open side door of a poorly-painted white van, and the sheer unmitigated joy of simply being outside – as if in truth our parents hadn’t forbidden us to come back inside until we were called. The rest of us were outside precisely to avoid the dangers lurking inside our houses.

The weird disconnect for me is that most of the “Talking Dead” have their phones out 24/7 and display symptoms of paralysis when they are without their devices. At least once a day I observe someone ‘freaking’ a little when they’ve misplaced their phone, the battery goes dead, or their device won’t function properly. They wander about like zombies or blind cavefish, eyes glazed, talking about seemingly nothing else. Gollum would be envious of the idolatry of their electronic devices.

All of them get defensive and pissy when I ask them why they need to have their phones by the bed, for example, even though they complain about it accidentally waking them. (Duh.) When I point out that it is possible to set parameters for emergency calls only, they recoil in horror, as if any limitation to being accessible is somehow objectionable. Our daytime hours are populated with the buzzes and pings of the devices of those who must be on constant alert, as if Star Fleet is going to call us to battle at any moment.

We evolve to use the technology available to us, tempered by disposable income and opportunity. To believe that anyone who now lives with their phone in their hand or pocket (or by their bedside at night) would not have done the same had the technology been available when they were younger is welcome to take a polygraph and get back to me.

It’s okay to have appreciated your time outside when you were younger. But if you would have had our current technology then, you might still be up in the tree but your hands would still be furiously scrolling and typing into the great internet, undoubtedly spending an hour telling me how wrong I am about your compulsion.

Comparing now to then in any respect is just another version of the “it was better back when” argument that serves only to highlight one’s age. And if you are one of the many who simply can’t walk to the bathroom without a phone, please don’t post memes about the golden days of youth, when you were outside, eating crickets or whatever thing you now glorify.

I love technology, especially when it is used creatively or as a tool. The phone isn’t the issue and it never has been.

PS: For many, the cellphone is the new purse; a repository of secrets.