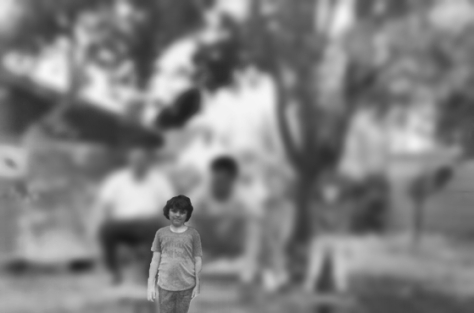 I was in a hurry, busily checking minor and mundane necessities off my mental checklist as I hurried through the building. The day was still unborn, and shadows blanketed everything that modern lighting couldn’t touch. To my right, a series of vertical windows rose above me. Ahead of me, someone sat in the shadows, in a small grouping of uncomfortable chairs, the type which serve their function but provide no real invitation to linger. His head was bowed, and his hands were clasped between his legs. His body language seemed to exude defeat. He seemed to be waiting for something unseen, an event to unfold, or for some greater force to expel him from his chair. The soft aura reflecting from the windows cast a curtain of gauze on the interior.

Despite my feet treading quietly on the institutional floor, his head rose, and he looked up. His eyes met mine. I noted a huge yellow, black, and discolored splotch around his right eye. His blond hair lay wildly around his features.

“Are you okay?” I asked, without even realizing I was about to speak.

“No,” he said, his voice cracking. Due to some triggered instinct, I realized that if he said a few more words, he’d likely either start shouting or sobbing.

I raised my left hand as if to stop him from speaking. “It’s okay.” I walked within two feet of where he sat.

“I think I need to leave before I react.” As he spoke, fifteen different scenarios filled the canvas of my mind. None of them were joyous explanations for his demeanor or appearance.

He fell silent in recognition of the fact that I knew what he meant without him saying the words of explanation. Because we’re human, it could only be one of four or five stories.

I removed my phone from my left front pocket. “Where do you need to be, other than away from here? By the way, my name is X.” I asked.

He told me. I typed the destination and found a ride that would be there in less than five minutes. I showed him the screen.

“I’m paying. Don’t stress it. I’ll go wait outside. When the driver shows, I’ll make sure he’s comfortable with it.” The young man nodded and didn’t speak.

As the sun burned the rim of the horizon, the driver pulled up. I handed him a tip and explained that someone needed a hand – and I was that hand. “No problem. He’ll get there.”

The young man slowly walked outside and opened the rear door of the waiting car. He did not look up, for which I’m glad. Seeing the side of his face again would undoubtedly cause me to commit the sin of asking questions.

Before he could say more, I said, “Pay it forward. You’ll remember this one day and have the chance to help someone.”

He shut the rear door and the car pulled away.

I don’t even know his name. But he knows mine. And that gives me hope.

An entire life, unknown and unknowable to me.

I fear we have things in common, though. I hope the young man’s journey is dotted with people interested enough to help him push forward.

P.S. I don’t deserve a pat on the back or words of encouragement. I needed this more than the young man did. Truth be told, my mind was filled anger that morning.