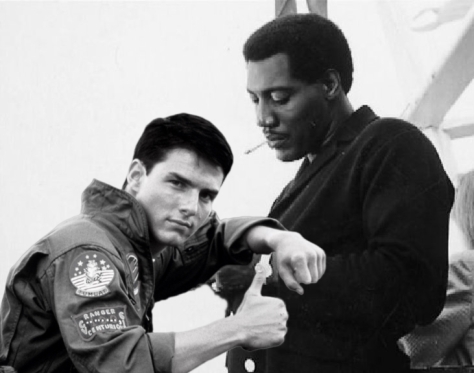 In the movie Top Gun, when Maverick (Tom Cruise) goes to Charlie’s House, most people remember the iconic song “Take My Breath Away.” For me, though, the song that stole the moment was Otis Redding’s “Sittin’ On the Dock of The Bay.” Toto originally was supposed to do the “Danger Zone” song, as well as another that would have been the song used instead of “Take My Breath Away.” Judas Priest was going to do a song for the soundtrack too but thought the movie would flop, as did many critics. Tom Cruise declined to do the movie repeatedly.

Most people with harsh criticisms of the movie tended to knock “the talking scenes” such as the one following the love scene at Charlie’s beach house. We all endured the testosterone-laden antics of our male friends in the late 80s as a result of this movie. For most of us who survived the 80s, each of us has at least one guilty pleasure in a song from the movie. I don’t think any of us miss the aviator sunglasses that seemed to be everywhere. None of us fully escaped the energy of Kenny Loggins as he sang “Danger Zone,” the fourth or fifth choice to sing the song.

What most people don’t consider is the unintentional coincidence of Otis’ biggest hit being in the scenes at the beach house. Maverick was about to go on the biggest mission of his life in one of the most modern airplanes in history, where death followed at every high-G spin.

Otis Redding recorded “Sittin’ On the Dock of The Bay” two times in 1967, with the second time being shortly before he died in December. The song was never officially finished. Otis is heard whistling in the song because he forgot the riffs he intended to fill in and started whistling to preserve the session. After Otis died, the beach sounds were added to this famous song by Steve Cropper, who helped Otis co-write the song.

I forgot to mention: Otis died in a plane crash.