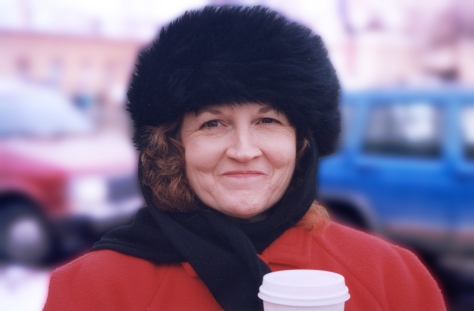 I stood in the living room of the history-packed house, feeling Jackie’s presence around me. It was the first time I’d been in the house without her. She died recently, leaving a trail of family and friends behind after almost eighty years of an adventurous life. Her husband Jerry stood nearby, his eyes full of loss, yet contradicting the slight smile across his face. Both of them possessed a confident air of optimism. They are the sort of people who convince you that you’ve recharged something essential in yourself after you’ve been around them.

On the coffee table near us, in front of Jackie’s favorite perch on the couch, was a big 1000-piece custom puzzle. I had it made for my friends in April of 2018. I worked for hours on the design, incorporating countless family photos of theirs into a patchwork of multi-directional and polychromatic designs, each chosen and placed to accentuate the pictures while also increasing the complexity of the puzzle. We animatedly passed a couple of minutes noting the pictures, comparing favorites, and laughing. On the bottom row of the puzzle was the strange picture of an even stranger man. I included it in the puzzle because I  thought his picture was an enigma and out of place. As it turns out, it was. No one knew who it was, or remembered that the picture was in the thousands of photos and albums shared with me to digitize. Now, the stranger remains frozen forever in the family puzzle, immortal, and sharing space with some amazing people. We all laughed about Jerry and Jackie thinking I put the picture there as a prank, a one-off kick in the pants for my friends.

“No, I promise I thought the man was someone you knew. He was, and still is, in one of the albums of photos  I scanned. I didn’t include him as a joke. Jackie undoubtedly still thought I was pranking her,” I told Jerry.

“Yes, we thought you were the odd brick, X.” Jerry paused. “When the brickwork and wall were built years ago out back, out of all the thousands of bricks used, the bricklayer used a single yellow brick toward the outer end. I don’t know if it’s true, but they said that the odd color brick used to be placed to break the monotony of the eyeline. Jackie and both were convinced you put that stranger in the puzzle to be the odd brick. You are the odd brick.”

I laughed, thinking that Jackie left the world thinking I designed such a complex and heartfelt puzzle for her, only to prank her with a single discordant note. Though it wasn’t true, I liked the idea. I had purposefully pulled her chain on several occasions. To be perfectly honest, I sometimes held back because Jackie was one of those people whose smile and warmth were contagious, yet simultaneously held the promise of a swift reckoning under the right circumstances.  I say that with fondness.

Tomorrow, the house will be overfilled with friends and family. Foregoing a funeral, Jackie instead requested a celebration of life among friends. I came over to share the slideshow I’d made for Jerry, one chronicling the envious life Jackie lived. I stayed longer than I should have, though, perched on another couch opposite Jackie’s favorite seat. I’m clumsy and ill-at-ease when I try to comfort people with words. I learned the hard way that each of us cringes and contains our own version of hell and that wide swaths of unpredictable time are often the only consoling force in the universe. In this case, I could sense that seeing pictures of a life well-lived and shared was a salve for the soul. We watched the entire 44-minute video. Surprisingly, I recalled many of the stories attached to some of the pictures. Jackie was meticulous in sharing with me the memories attached to the pictures.

One of the best photo projects I ever did spanned a few thousand pictures. I came to it accidentally and as a result of being volunteered to help with another project. It was the doorway that allowed me to get to know a couple of fascinating and endearing people. Because of the pictures and the stories that accompanied them, I got to live a little slice of their long and worthwhile lives. It was a privilege, a learning experience, and something I’ll always remember as an honor.

My life didn’t meaningfully intersect with theirs until they were both older and retired. Both had full lives and careers and yet I only knew them as a couple, both engaged and artfully overlapping their stories to my delighted ears. Jerry was a medical doctor in life. It was plainly evident that his best role was that of a husband to Jackie.

I look back on the swath of pictures I was trusted with and get to bear testimony to the extraordinary life Jackie trailed behind her.

It would be an exercise in bravado to ask for a better life.

And so, with the gentlest and most affectionate gaze, I peer backward through her timeline: a laugh, a smile, a masterfully-executed bit of snark, and a twinkle in her eyes.

To be able to view the long curve of her life by way of hundreds of pictures has all but demolished the sadness that would have accompanied the knowledge she’ll never again shake her head at me as I played the fool for her. I can’t imagine the hollow void in the hearts of those who were lucky enough to stand in her aura in her daily life. There were a few moments while making the slideshow that almost capsized me.

I reduced her life from thousands of pictures to 240 and could distill them no further. A life like Jackie’s deserves a herculean accounting. I gave the photos the reverence that they deserved.

And, as it turns out, I am not the odd brick.