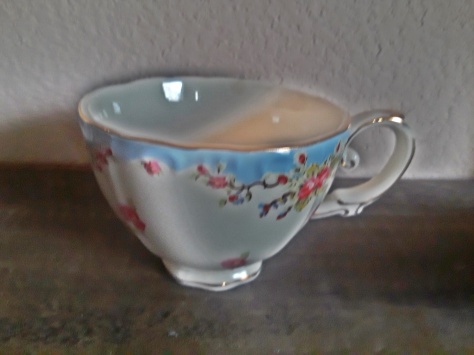 Starting with an admission of a bit of my own hypocrisy, I admit I own a very delicate set of teacups and saucers. My friend Jackie, who passed away recently, was the troublemaker who gave them to me. Since getting the surprise gifts of specialized china, I started using one cup as a coffee cup almost immediately. It alternates with my green Grandpa cup as my cup of choice. It looks alien in my hand.
On a very recent afternoon, I made a dish that reminded me to use a packet of special lemon and spice seasoning, a flavor bend I tried the first time thanks to Jackie. She was a talented cook. We shared a lot of ideas regarding things culinary. While my ideas were almost exclusively adventurous or weird, Jackie’s were rooted in decades of trial and error. Because I felt a bit of Jackie’s inspiration in me that afternoon, I used two of the saucers to serve pieces of baked chicken on. I think Dawn thought I was a little crazy, even though she knows I loathe the idea of china and of owning things that don’t provide beauty and utility. Hoarding allegedly expensive dishes that are seldom used doesn’t strike me as appealing logic.
I’m constantly joking that we should take such dishes outside and use them for skeet shooting. Honestly – I’m not joking. “All dishes are disposable if you’re so inclined.”
Jackie bought me the teacup set because of our discussions about tea, coffee, and a few other drinks. It didn’t hurt that I had a huge set of custom cups made especially for her and her husband, using pictures of them. She snorted when I told her the best flavor of tea I’d tried in a long time was called “Gunpowder.” That part isn’t a joke, either. Dawn surprised me with it for Christmas one year.  It was as bitter as a mouthful of salty dirt. It was delicious.
On another front, I have a family member who hasn’t got the memo about china being almost irrelevant. Her hoarding makes a logical discussion very difficult. As a society, we’ve moved away from the idea of preserving china or of storing such dishes in a huge cabinet anywhere in the house. Yet, so many people continue to guard the idea that china is valuable or worth wanting once someone has passed on. Dishes are only valuable to us if there is a memory, moment, or feeling attached to it. Dishes we never use do not find themselves embedded in our nostalgia. Few people want the burden of dishes that shouldn’t be used. As for the family member, most of her dishes had to be discarded a few years after her house became unlivable due to her hoarding. She has a set that she feels to be very valuable. They’re just dishes to those who never used them around a table of friends and family.
Which brings me back to my hypocrisy.
A couple of years ago, I researched to discover what kind of coffee cup was part of my earliest (and most loved) memories with my Grandpa Cook. He served me coffee as if it were no special thing. Even though the cup I bought is not the same cup my Grandpa handed me when I was four years old, it serves as a placeholder. It’s precious to me, like the blue one my cousin sent me, the one holding the razor my Grandpa himself used.
The same is true for the teacup I use from Jackie.
The teacup is a reminder of friendship, interest, and even of the loss that inevitably befalls us. I’ll accidentally break each of these cups. I have no doubt. My fingers will become more infirm, and my grip more loose. They’ll perish in individual piles of broken china. I won’t mourn them, though. They will have brought back Jackie to me, in small doses, on quiet, somber fall evenings, and during sunlit summer mornings. I don’t resist the recognition of entropy as it works its necessary magic on me and the world.
Everything that falls between, all the finite minutes, are the real treasure.