Noted Etch-A-Sketch artist Beth (a notorious yet talented cousin) conspired with my other favorite cousin Lynette, aka ‘Operative Cheetah.’ Beth, using Lynette’s meticulous input, created and designed a permanent Etch-A-Sketch of one of my favorite places in the world: the plank porch at my grandparents’ house on the hill in Rich, a tiny place located in Monroe County. She then installed it in a shadow box stolen from the attic of a noted philanthropist who curated at the Smithsonian. Somehow, despite the current apocalypse, it arrived at my house without damage.

For those who didn’t know that Etch-A-Sketch artists exist – or that they can be rendered permanent by those with the knowledge to do so. Beth’s Etch A Sketch Facebook Page

Although unintentional, Beth provided my cat Güino with an immediate resting place. He pawed and clawed until he separated the 14 meters of wrap and created a nesting spot for himself.

This picture is of Güino later, after I pushed trash in around him to determine how long his planned residency in the box might be.

This was one of the apologetic notes written on the packing box: “I only had gift tape and this is the apocalypse.” 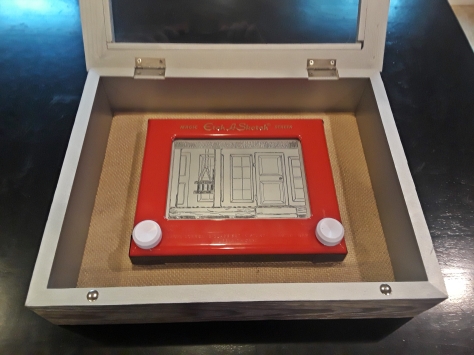