Dawn wanted to take pictures using her phone; her camera is significantly better than mine. She handed me the phone as she said, “Here, you can take them better.” She said that despite the years of insurmountable proof that the opposite was true. ” Thus, two of the best photos are obscured by my inexpert fingers. They are my favorites, of course.

After painting a couple of rocks, something Dawn said that triggered a thought in my head, which is usually a dangerous sign. We were outside the cabin admiring the rocks that had surprisingly survived months (and even years) exposed to the elements. One of our previously ambitiously executed projects was somewhat intact but missing a couple of elements.

Because I had exhausted the obscenely bright neon color as the base of the two large rocks, I had an inspiration. Because I had a surplus of gloves, I opted to collect 5 medium rocks and approximately 50 small rocks. I sprayed a huge glob of several colors on aluminum foil and used my hands to roll the rocks around in my hands and paint them that way. Luckily for me, my unreplenished grab bag of paints contained about three dozen bottles of varying paints. It was a bit of overkill. Once we painted the large number of rocks, it looked quite striking against the backdrop of the surrounding forest and subdued colors nearby.

I made the png cutout version to better see the first two rocks we did. Not wanting to be outdone, I completed mine a nod toward my two favorite cousins, Beth and Lynette. I added a face on the bottom that was supposed to register surprise. I hope they don’t mind that I might exposed their secret identities again. Visitors to the cabins will drive up and see the two neon rocks and undoubtedly question what “X, Cheetah, Falcon, and Rojo” have to do with a getaway cabin. I challenge them to exceed my creativity and/or weirdness.

I took one from over the top of our heads, in case anyone needed to see such a picture. 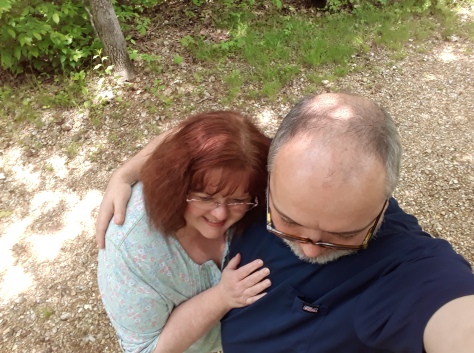 When we arrived back to our normal lives here in Springdale, we went to see my in-laws. While the adults talked, I took the time to build a little town from what I could find in the yard. (Plus my invaluable index cards, of course.) You have to find your fun wherever it may be found. 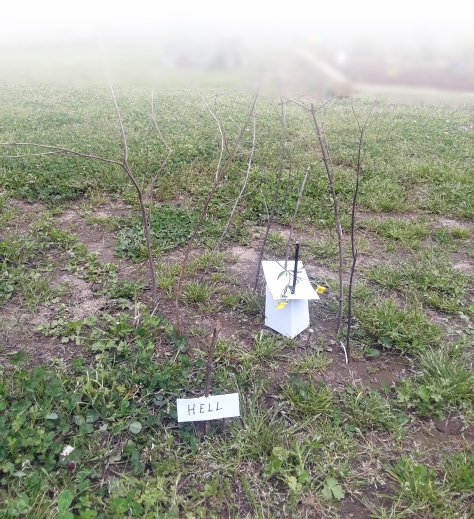 This picture is when Hell broke loose, pun intended. It was implied that I couldn’t leave my creation standing. For that reason, I had to pretend a tornado hit Hell and demolished it. I hope everyone is okay.