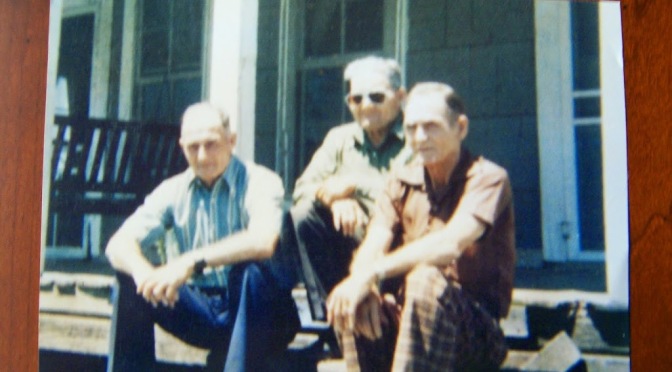 As strange as it sounds, one of my most prized possessions is most of a rusty nail. Seriously.

Years ago, before it was torn down, I visited the last house my maternal grandparents lived in together. I went on the property at great risk, as it looked like it had been abandoned and infiltrated by wasps, weeds, and rain through the old metal roof and tar paper siding. Before moving to this house, they lived to the south, still off highway 39, on the opposite side, near White Cemetery. They had an outhouse at the previous house.

I have an incredible number of memories about that old “house on the hill” as I call it. It was in Rich, Arkansas; not much of a place, really, even its heyday if it ever truly had one.  It was on Highway 39, on the west side of the road. Cook Road was slightly to the south of the old house. Most of the time cotton seemed to be the crop surrounding it in every direction.

I remember when grandma and grandpa moved in. One of the first things done was to hang a porch swing on the south end of the full-length wooden slat board porch. In that day, one didn’t use complicated screw hooks – a long nail would be hammered in and bent around to hold the chain linked through it. This isn’t the safest of ways to do it, not by today’s standards. Yet I can’t remember seeing one fall when I was young. (The second thing done was to build Grandma Nellie a storm shelter. She was deathly afraid of any weather, having survived the stories of the tornado in 1909 that leveled the town of Brinkley.)

Either Uncle Raymond or Uncle Harold picked me up and held me up high toward the roof of the porch. I held the nail more or less straight while grandpa hammered it in. Once we nailed the two nails, we hung the swing and sat in it, enjoying the simple fun and relaxation of it. I spent a lot of hours on that swing with grandpa. On some level, it is partially to blame for my extreme views on simplicity and comfort. Adding 44 uses and extras to things mostly ruins them.

To this day, when it rains sometimes I can smell the dirt and cotton blowing across the porch toward grandpa and me, sitting on the porch. If weather was coming, we’d usually be listening to grandma cajole grandpa into coming into the house or getting to the storm shelter.

The only thing I was really interested in salvaging that day in the 90s was the swing nail closest to the house, the one I remember “helping” put in. Honestly, I can’t say with 100% certainty that it’s the same nail, although I believe that it is. I’m humbled to think that the first swing installed at that house was balanced there almost 1/2 a century ago. I managed to extract some of the long bent nail from the upper wooden beam above the porch. Everything was caving in as I struggled to use it for footing.

Sidenote: one branch of the Pledger family was the last to live in the house. Their stuff, including pictures, were scattered all around inside. I learned later in life that my grandpa Willie supposedly had an illegitimate child with one of the Pledgers. At the time, he was working for the original Pledger patriarch at a sawmill in Clarendon. My mom didn’t know anything about her half-sister until after the half-sister died. The story is that she and mom looked a lot alike. Although I have delved fairly extensively into the Pledgers, I have avoided any direct linking to their trees or stories. 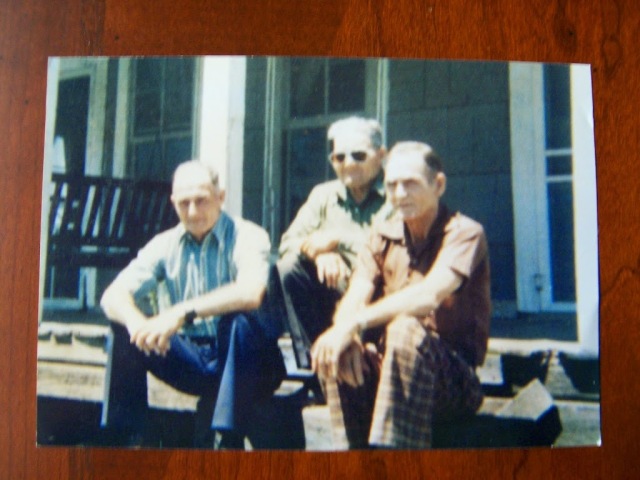 This picture is of the old house on the hill. (The aforementioned porch swing is on the left in the background.) Grandpa Willie is seated center. They are sitting on the porch steps, a series of piled railroad logs. I nailed at least 1,000 nails into those logs. These logs were one of the many reasons that I still love the smell of creosote of all kinds.

One thought on “A Rusty Nail Is All I Need”