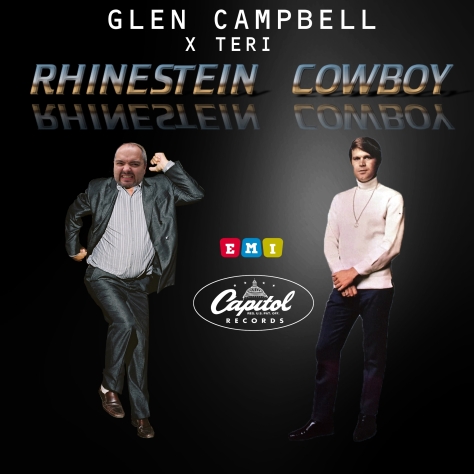 Part of this story is true, part is an embellishment. As I was telling jokes today, someone reacted contrarily to my contention that Glen Campbell was a member of the Messianic Judaism sect, something I learned about him when I was going back through his music a couple of years ago.

(One of my jokes I sometimes tell is this: “Did you know Glen Campbell has a brother who is a comic? His name is Grin Campbell.”) It’s okay to groan for reasons other than who occupies the White House.

As I was growing up, I had a viral aversion to country music. My Uncle Buck, who had been immersed in the country music scene, told me more than once that I should have followed guitar and bass to music, rather than orchestral instruments. As I’ve aged, I acquired a taste for a huge variety of music, including a lot of country music. It’s true I’m just as likely to listen to Japanese Yodeling as any other genre. I used to loathe “Rhinestone Cowboy” like it was an assault on my eardrums. That turned out to be the case with a great deal of music, as I associated it with the drunken brutality of several of my family members.

My favorite Glen Campbell memory was the time I recorded a duet with him in Topeka, Kansas. He had been invited to do a couple of cover tunes. That’s how we ended up recording “Rhinestein Cowboy” for the Jewish Musical Alliance.

PS: For those who like actual facts, Glen didn’t write and also wasn’t the first person to record “Rhinestone Cowboy.”