My wife Dawn greenlit my enthusiastic wish to build a Christmas villa in the living room this year. Using several hundred pictures, 100+ boxes, innumerable lights, a couple hundred ornaments and bits of crazy, a universal remote to control it all, a Festivus pole (for the rest of us, of course), hidden gift compartments, a house cat who daily prays for a gift to fall from above, and a huge dose of yuletide spirit… we present the most unusually-decorated living room you can possibly see all year.

I shot this video with Dawn performing the role of director. I drank 17 cups of coffee prior to shooting and I now regret telling Dawn her version was too jittery.

P.S. I wrote this version of “Carol of The Bells” myself so that social media sites couldn’t claim copyright. I hope you like that part, too. Writing music is another one of my hobbies, one which requires a commitment of time.

My living room has a vaulted ceiling, so the drunken rectangle I created piece by piece is approximately 8′ high, 15′ wide, and 20′ long. It’s difficult to grasp the scale unless you walk through the front door. 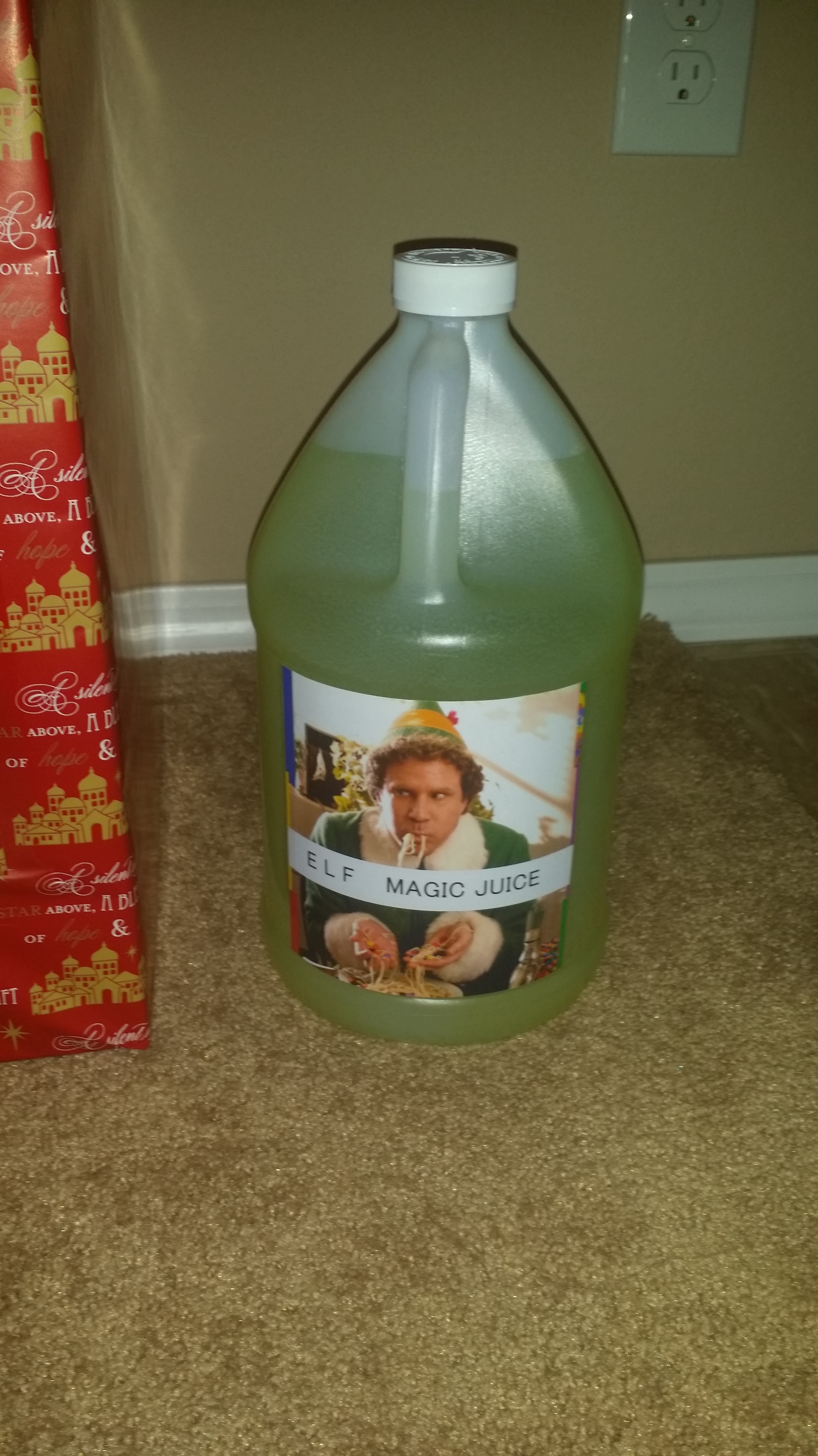 A gallon of my patented Elf Juice, one which grants the imbiber the ability to decorate one’s domicile in the manner of Buddy The Elf.

A necessary part of the structure is a cat bed constructed into the base of one of the 8 9-foot vertical columns. (Our cat’s name is Güino, given that he was a shelter cat, one rescued from the Feline Witness Protection Program.) 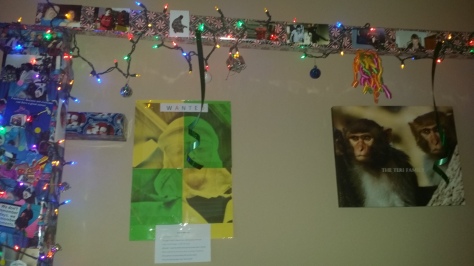 The green-and-yellow picture is a wanted poster for my stepson Ty. A list of mostly imaginary crimes is listed at the bottom. To the right, you’ll note our infamous family portrait, just us two monkeys posing for the camera. (Dawn is on the left in the portrait, by the way.) 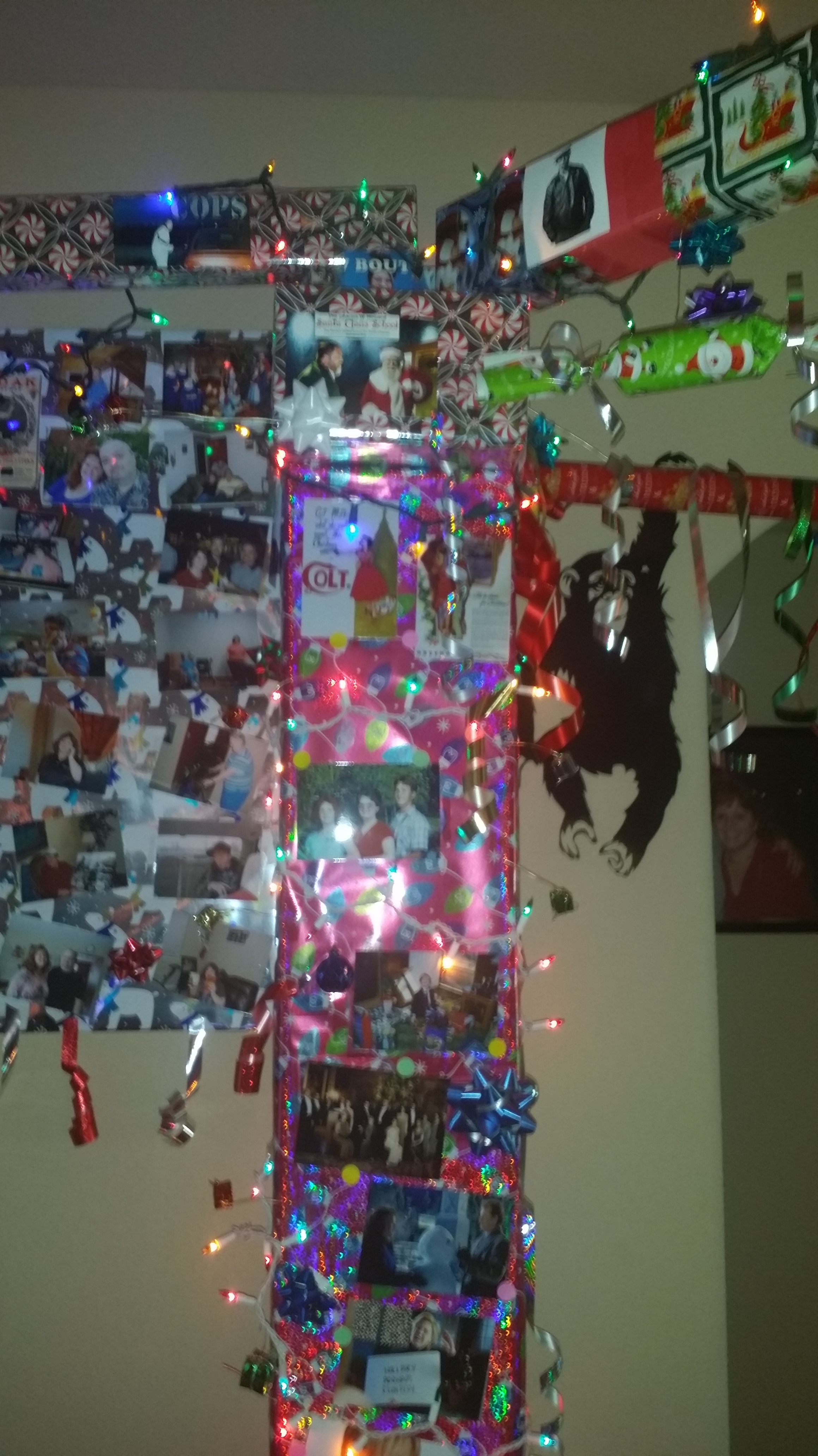 Anyone who thinks I don’t like pictures, please take a note at this point. Despite ordering several hundred before I started, I found myself needing more as I neared what I thought would be the final push to completion.

The columns are all tall and each one is connected in a drunken rectangle around the entirety of the living room. Looking back, it was a lot of work but if Dawn didn’t lose her mind watching me meticulously create each box, each column, and apply every picture and detail, I will look back on this in years to come and ask, “Why didn’t anybody stop me?”

🙂
There are both visible and concealed Christmas-themed quotes from some of my favorite books and movies for the season, too.

Don’t be distracted by the backward clock. It comes in handy when visitors foolishly try to determine what time it is. Note the handsome couple in the background of the clock. Anyone with a spider phobia needs to walk around carefully, as the million streamers often touch you unexpectedly in the neck as you pass.

What’s not visible in this barrage of pictures and Christmas insanity is my appreciation for life, one given to me in daily wonder and amused amazement.

To have the time, energy and ability to creatively express myself is a luxury which I don’t take for granted.

I have to admit, though, that this is a spectacle.

Almost everyone I know has at least one picture of honor in the celebration. Some of the pictures are irreverent, but none fail to make us think or laugh. Or think then laugh.

You’d never know it, but there are several presents hidden in plain sight around the room. Several might require demolition to access them but as we all know, that is what Christmas is all about.

Taken from the kitchen, looking over the counter, perhaps waiting for Santa Claus to come inside and demand a pint of eggnog and a slice of pepperoni pizza. 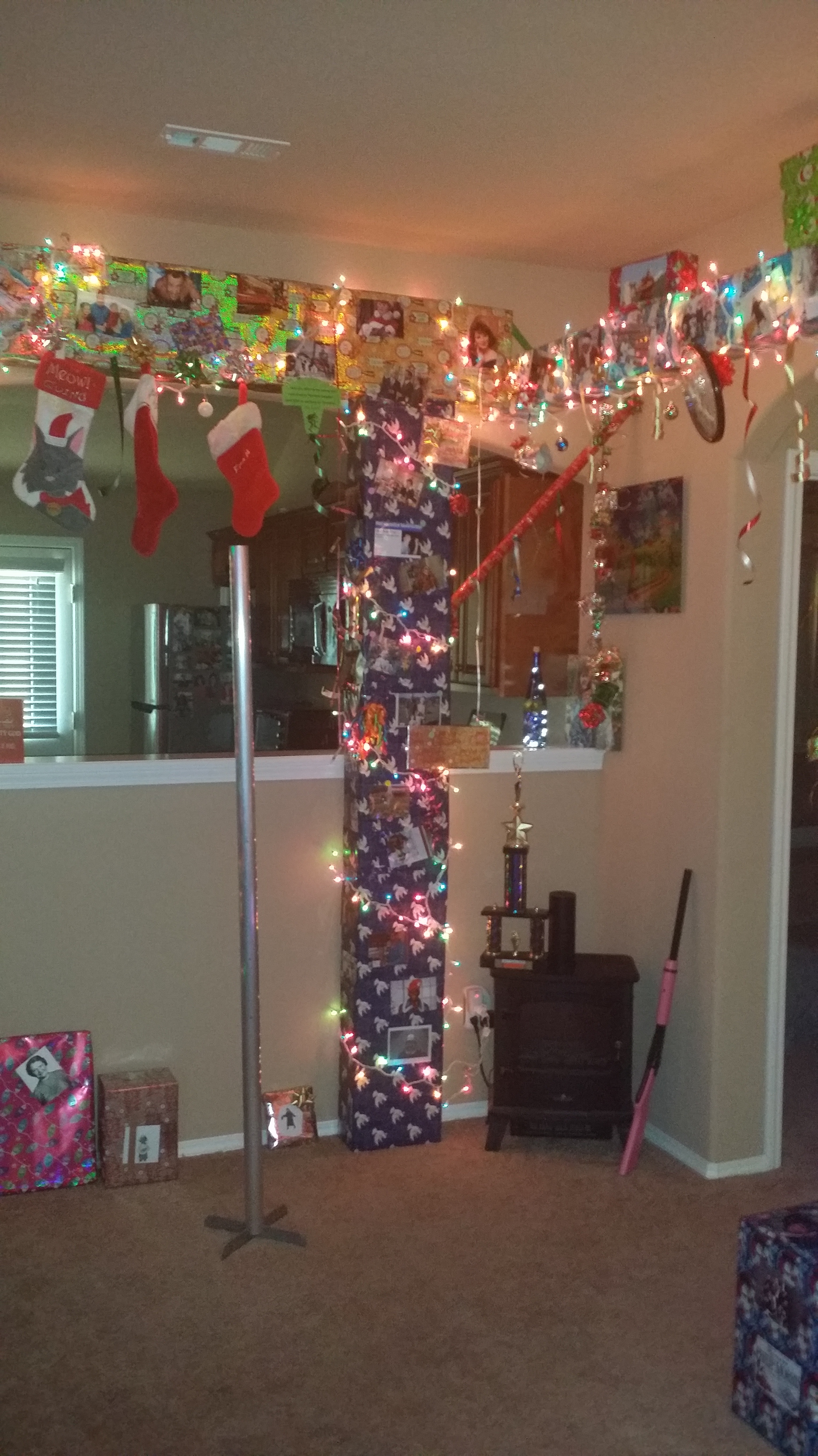 The Festivus pole certainly adds a dazzle to the room, doesn’t it? In keeping with the original intent of Festivus, I don’t adorn the pole with anything to distract us from its beauty. I’m convinced Dawn wants to accidentally recycle it sometimes – or give it to someone building a fence. If this were to happen, however, I would have no choice but to replace it from Wagner Steel and add her transgression to the following year’s “Airing of the Grievances.” 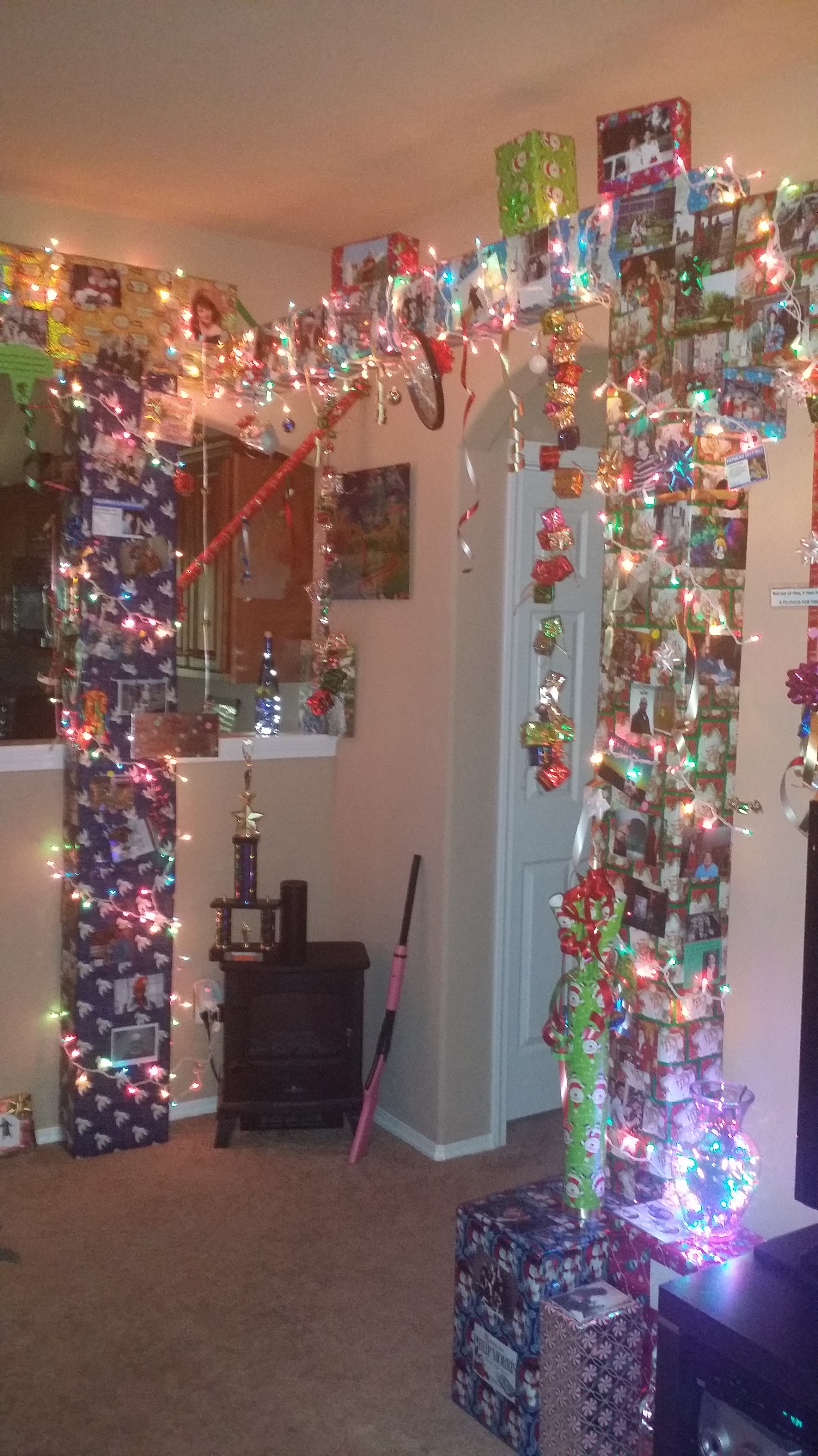 Note that my genuine Daisy BB gun sits next to our wiretap device, ready at a moment’s notice if some crazed Christmas-hating Grinch attempts to enter the house and steal Christmas from us. Hint: such a person is going to need a truck, a saw and a mean disposition.

Also, the Grinch will have to depart with it all, as I took great care to conceal hidden compartments for gifts. I kept a treasure map, but I’m not certain even I was diligent enough to note them all.

If anyone looks at this and wonders, “Is that ME?” – the answer is probably “yes.” And, you are welcome. Several hundred pictures used in this project makes it likely that if I know you and have shared any levity in our lives that you are part of this. 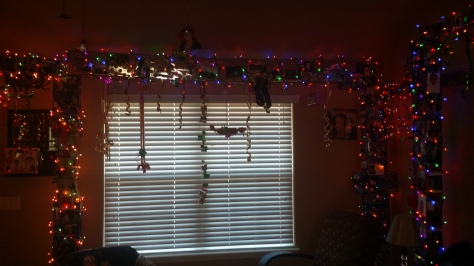 Christmas quotes, ornaments, pictures from my life, pictures of iconic Christmas scenes, vintage Christmas ads, crayons, bows, ribbons – if it is interesting or unusual, I tried to find a way to include it in this. 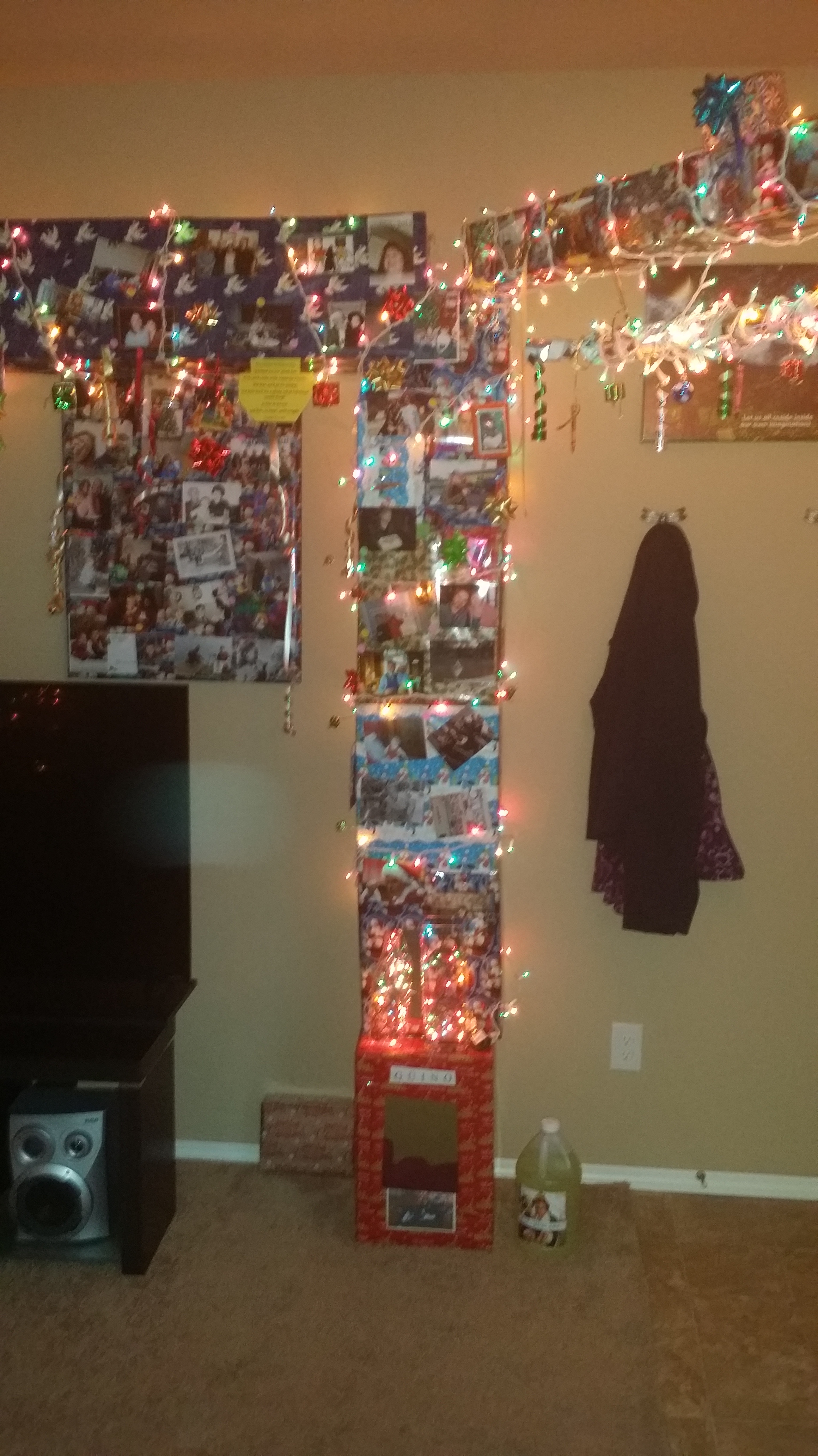 The above picture is of the column containing the cat bed on the bottom. I’m pretty sure there’s at least one hidden gift in this column I forgot to take note of during the initial stages of building this.

The above was taken from the reverse side of the decorations. Note the dollar bills. Here’s a link to explain what the dollars mean: Christmas Dollars Each Year
I didn’t take as many closeup pictures of the tree this year, even though we added several fantastic ornaments. Some of them I ordered and had custom-made, some were whimsy from different stores and events from our lives this year. I’ve met many people who’ve adopted a motley approach to their Christmas tree ornaments but I’ll be ornament-to-ornament that none shares a breadth of diversity like the collection my wife and me have. People tend to look closely at our tree and shout, “THIS can be used an ornament?!” and laugh, filing away the idea for later use.
Another link…
Now that it’s done, I can look at the pictures and lights, and wonder about my year and the future which follows. Another Christmas, another year.