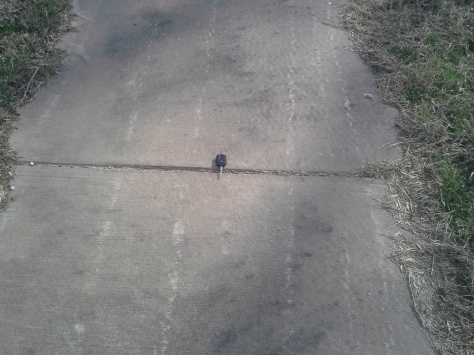 I decided to take advantage of the weather this afternoon. I drove over and parked near the best dog park in Springdale to take a walk.

As enthusiastic as I was, I opted to forego taking a really long walk. It was a stupendous afternoon and I was able to give an older couple on their first visit a tour and explanation of the area. It should make everyone reading this nervous to think that in many ways I am an unofficial ambassador for Springdale.

Arriving back at the car after a decently long walk, I discovered that I didn’t have my car key in my pocket. In a moment of disgust, I realized that I had either locked the car and left the key somewhere in the front or dropped the key somewhere on my long and circuitous route along the trail and back road. I’m sure that bystanders wondered if I had lost my marbles because I checked my pockets at least three times and then inexplicably removed my hat to check it, too. You never know -at my age, it’s possible to put your wallet in the freezer so a car key in my hat wouldn’t be impossible. Besides, if Seuss can put a cat in the hat, a car key seems benign.

Having no choice, I walked the same route again, vainly hoping to spy my key lying somewhere on or near the trail. My plan for a “not so long” walk evaporated. I knew that if I didn’t find the key, I would be calling my German friend named Über to come pick me up.

As is the case in so many stories, the key was at the very end of my original walk, where both sidewalk and pavement ended. I had turned around there, pulling my phone from my pocket to check the time and change the music selection. This spot is very near an infamous hoarder house I’ve written about before.

I saw a little black object in the middle of the sidewalk from quite a distance, hoping that it would be my key and thus save me from dealing with the persnickety car dealer to obtain another one.

While I was glad to see that my temporarily lost key was indeed the object on the sidewalk at the end of the road, I was a little melancholy to know that I would have to walk the route again to get back to my car. These first world problems are such a nuisance.

I forced myself to walk back to my car, as the breeze lifted me, the sun warmed me, and the music accompanied my thoughts, lost in that beautiful March afternoon. My dogs were barking as I neared my car and the dog park. There were several human and canines shouting, barking, laughing, and cavorting. As I stopped to pet one of the dogs which ran toward me along the fence, my own dogs were forgotten, even as I reached over and laughed too, as the dog licked my entire arm in happiness.