I was certain I won the game of charades until someone pointed to the notice behind me: “Beginner’s Sign Language Class Today at 6 p.m.”

Looking back, it’s difficult for me to believe I thought that “On Top Of Old Smokey” was a romantic love song geared toward senior citizens…

I decided recently to change careers. When I applied to Yoga Certification School, my application was denied.

Turns out, my birth certificate was stamped “Do not bend or fold.”

In the last two days, zero out of 23 people I’ve asked failed to accurately recite or sing the first 7 words to the “Mister Rogers” theme. I’m not counting those who were less familiar with it -just those who were ‘sure.’

Most of you will Google it and among those several still won’t believe that they too have a false memory of the actual words.

I guess it’s one thing to holler “Recess!” at work – but another to stand by the door with chocolate, regular, & strawberry milk cartons and encourage everyone to take one as they exit the work area to go play outside.

I sold the mineral rights to my land. Texas Oil Company and Johnson & Johnson are partnering to drill for baby.oil.

I sold the mineral rights to my land. Texas Oil Company and Johnson & Johnson are partnering to drill for baby oil.

“It’s a sure sign that dance has evolved too far into the realm of the esoteric when a dance trend is done so well that it is indistinguishable from electrocution.” – X

That guy had so little creativity that when he joined the church they accused him of having unoriginal sin.

I ain’t saying the fog is thick this morning but two boats have passed me already.

Due to my lack of controversial behavior I have been down-graded to the “Do Not Watch List.” #aarp

To the residents of Springdale, my apologies. I misunderstood what my boss was asking for when he asked for a flash drive on my way to work. I know it can’t be unseen.

To the residents of Springdale, my apologies. I misunderstood what my boss was asking for when he asked for a flash drive on my way to work. I know it can’t be unseen.

The doctor told me to serve more veggies but I gotta say that broccoli and tennis rackets don’t mix.

I pointed to the sign above me, the one which indicated ‘Fruit’ and asked her why they put my nickname there.

It is situationally ironic to hear hospital employees say that “they are sick of the place.”

Normally, I follow the admonition of “never negotiate with terrorists.” My mother-in-law is the one exception.

So that people will be reminded to do them correctly, Congress has renamed the act of “The Splits” to now be known as a ” Lunar Landing. ”

Did y’all hear about the guy the police brought in for questioning due to possible cannibalism? They grilled him for an hour.

To say that you want a bowl of cereal is accepted as normal, whereas if you say you want a plate of cereal you sound crazy. Ergo, insufficient concavity is bad.

It occurred to me that the song, “Don’t let the sun catch you crying” is basically a PSA for sad vampires. 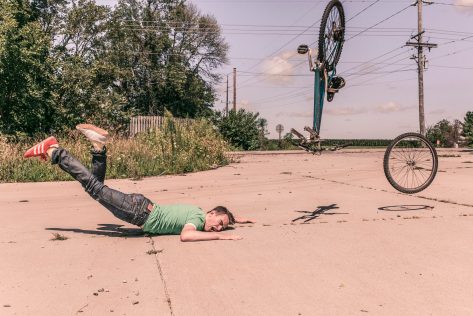 The Hogeye Marathon is passing in close proximity to my house again this year. I think they put up the mile markers on the route so early only to tempt me to finally succumb and pull shenanigans. It’s getting more difficult to resist the wild call of my inner prankster.

Because life is short, I’m hereby letting everyone know that if the Hogeye foolishly passes near my house next year, the game is ON.

Among my laundry list of highly desirable Christmas/Birthday gifts for my wife Dawn last December: this beautiful custom metal door sign for her office. I waited for her to remind me to install it. Shockingly, this reminder never materialized.

Nevertheless, I took the initiative this afternoon to put it up.

The original template had Voodoo Mojo Conjurer, but wouldn’t quite fit on the door plate.
.