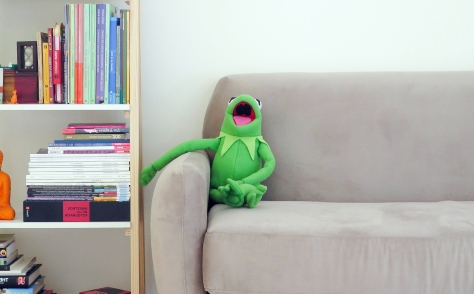 Three weekends ago, Dawn and I opted to buy groceries at Walmart. It was a fortuitous trip, as several anecdotes arose from that day.

During our visit, we noticed a few instances of people gawking and talking, though we couldn’t see what the tumult might be. Walmart is one of those places where the mundane morphs into the unexpected at the drop of a mouse-filled hat.

After a few minutes, we watched as a 48″ tall robot rolled toward us. Since no cyborgs jumped out to follow it, we assumed the robot uprising hadn’t yet started. This turned out to be one of the robots doing image inventory as it rolled responsively among the startled shoppers and its directed laser counted and cataloged the million things on the shelves.

I could almost picture an elderly lady seeing it and rapidly fanning her face as she uttered, “Well, I do declare!” with a precariously high-pitched Southern drawl.

I went to another aisle and was inspecting the 573 different types of sauces when I saw the robot smoothly roll down my aisle. Behind it, 3 small Latino children were chasing it animatedly, their excited chatter like Spanish-speaking birds. They jumped in front of it to see if it would stop instead of plastering them on the cold floor, which it did. They were asking it questions as if it might answer them. It was adorable.

As they neared me, I had an inspiration.

In Spanish, I told them that it was a SINGING robot and that if they sang to it, it would reciprocate accordingly and perhaps even answer their questions through song.

Just as I said the words, I look up to see their papa approaching. Since it seemed reasonable to double-down on my lunacy, I told them again to sing to the robot.

The dad smiled from ear to ear and nodded. He said, “Yes, sing to it.”

As they started singing, I couldn’t help but laugh. The dad laughed too, even as he exhorted them to sing more loudly to ensure that the robot might hear their tiny, lovely voices united in the most unlikely place for joy.

I watched for a moment, noting the beauty of their enthusiasm. In that place of commerce and on that day, all of us shared one of those fleeting moments of blissful laughter.
.