Since my friend Casey surprised me with a pitchforkkreeper-themed pair of socks, this will inevitably require me to wear shoes with greater frequency. She signed the attached note: “Merry Thanksgiving Christmas etc etc etc Love Casey.” I now have proof that not only does she know me, but that she shares a deep affection for me. Much like our ancestor’s decision to create credit cards, this might ultimately become one of the great missteps in her life.

Additionally, she used one of the tricks from my repertoire: she adorned the packing envelope with lovely pictures of me, ones which reflect the solemnity with which I live my life.

🙂 I’m certain that the mail carrier enjoyed the spectacle of someone so handsome being ridiculed via the postal system. The picture on the front is noted as “Drunken Hula Dancer,” while the one on the obverse side endearingly indicates “The Pink Dreamer.” The former picture was taken after Tracy, Casey, and Dawn attempted to out-drink me at the Hot Springs Invitational Prune Juice Festival in 2014, while the latter was snapped by a photographer as I sat opposite of Casey at Karaoke night, enamored by her choice of hairstyles. (For those of you wondering, my wife didn’t get jealous.) Note: once you start putting people’s pictures on stamps or the mail, it becomes a frivolous and fun addiction.

As for the Pitchforkkreeper picture, if you’re unfamiliar with the lore and mythology of this picture, suffice it to say it is one which has forged a deep and unsettling bond for many of us. The original picture is one taken by someone’s trail camera in the middle of nowhere – and the person was never identified. Pitchforkkreeper abides in us, always, a symbol and beacon of untethered hilarity. I have a 16 X 20 plaque of him in my living room (which is true) to remind me that it’s more important to be weird than to be understood.

Casey, thanks for much for the socks. I would have never guessed. (I’m surprised your husband permitted you to buy socks for another man. Socks are ‘the lingerie for middle-aged men.’)

May Pitchforkkreeper keep your Christmas safe and filled with laughter; the kind associated with shared times, not the kind you usually share with me when you note my fashion choices.

P.S. I included a picture of my cat Güino, in honor of Casey’s unfathomable love for all things feline. If you’re a friend of Casey’s, it’s important that you make an effort to adorn her life and house with as many feline knick-knacks as humanly possible. She’ll thank you, just as I thank her. The gift took some thought and effort. 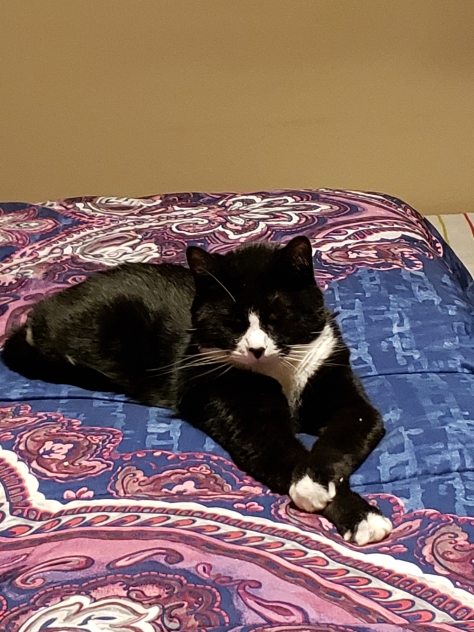