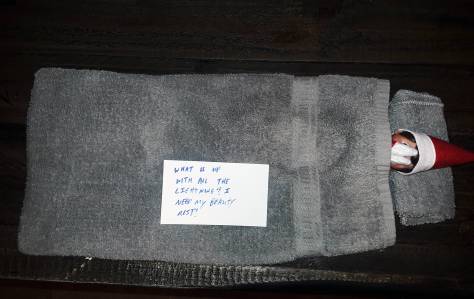 As I turned the corner earlier this morning, I was momentarily startled, as the entire neighborhood went dark for a couple of seconds. We had an amazing lightning show last night, possibly in early celebration of the upcoming yuletide season. My modern stove light was blinking like a Johnson patrol car’s lights after pulling over someone with an accent. My Elf Mistertoe attempted to slumber on the kitchen counter, his hands clasped over his eyes. I don’t know how he could sleep with that damnable blue light pulsating like a beacon. Elves, as you know, are unfathomable in their habits.

Outside, the skies had cleared, leaving a vivid waning crescent moon to highlight the gnarled branches of neglected trees along the unincorporated side of the county road. A large, twisted trampoline lay half in the road and several neighbors had fence sections on the ground, having surrendered to the onslaught of the direct winds. On the other hand, that side of the road tended to look like the ‘after’ picture of an Allstate insurance commercial. The road was covered in leaves and detritus from last night’s storm. The air was saturated with the smell of a damp forest.

As I passed the Latino church near the Friendship Road cemetery, my eye caught a huge Christmas light display further to the east. I couldn’t figure out which house it could be. Nearing the entrance of the cemetery, it dawned on me that there was no house; the solar farm contained several utility crane trucks, each illuminated with a pale yellow sheen by security lights. From a distance, the pale lights looked like a thousand Christmas lights splattered across multiple gables of some unseen house.

On my way back, I saw the furtive fox again as it darted away near the perimeter fence adjacent to the road. It did not linger to watch me as it sometimes does, undoubtedly with errands to run. And in my ears, Il Divo sang, “le canzoni sono lucciole che cantano nel buio.” (…songs are like fireflies that sing in the darkness.)

On my right, at the house on the small hill overlooking the edge of the road, a man sat on the edge of his porch. Normally, this house is invisible to passers-by until the fall comes and strips the curtain of foliage away. I waved and he waved back. I hoped that his day would be as beautiful as the one I’d already started.

On the road, in the dark, it was all mine, and mine alone.