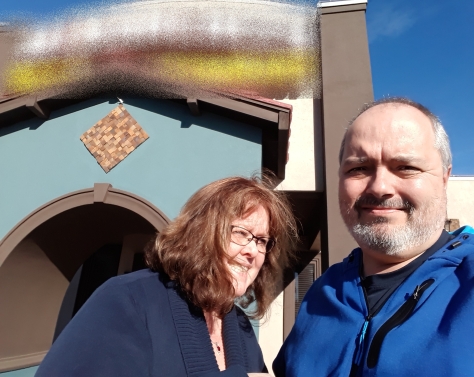 As we were driving out of town, we skipped several eateries along the way, ones which we knew would be great. Absent being sidetracked, we were holding out for a repeat experience in the town of our destination. We had eaten at the tex-mex in question once before and although it had some issues, we were very interested in giving it another try. We had hunger and enthusiastic anticipation to ensure our experience would be great.

And the universe noted our idiotic expectations and drove them headfirst into the rocks.

We stood at the door as various employees jockeyed toward the front register and seating chart. I said, “Yes, two please” at least 4 times. Finally, one of the people decided to seat us. This undoubtedly was part of their strategy to make us work up an appetite or perhaps wisely flee the building. After a long wait, a waiter appeared. He seemed very uncertain. He came back twice to ask about the drinks and appetizers. The salsa was tasteless, even though it felt like it might contain a numbing agent.  While Dawn went to wash her hands, I attempted to salvage the salsa by using a chip to pluck onion and cilantro from my pico de gallo bowls and mix it with the lifeless concoction.  Upon tasting it, she said, “This tastes like tomato sauce from a can.” I laughed. I poured all the juice from pico bowl and managed to get some flavor in the salsa.

I’ll forego most of the usual jokes about bathrooms and Tex/Mex eateries. I’ll say this, though. When I used the restroom and opted for toilet paper to blow my nose instead of the hand-activated sandpaper dispenser at the sink, I laughed when I discovered that all of the toilet paper holders were empty. The odds of all the holders being emptied were so slim that I defaulted to another of my theories: if the bathroom smells like a lakeside bathroom or there’s no toilet paper, it’s generally a bad idea to frequent the eatery unless one of your hobbies includes studying infectious diseases. I usually trust my instincts about these things. I knew we had made a critical error in our eating selection. The men’s bathroom had all the allure of a WWII latrine trench.

A few minutes later, I noted a man hurriedly scampering toward the restroom. Although I didn’t actually hear his reaction, I imagined that a shrill cry of “No!” followed by a tirade of profanity wafting through the air. Pardon my specificity, but I hope he discovered the absence of the necessary bathroom accessory prior to engaging.

Our waiter was inexperienced. I left my readers in the side door of the car, so I was attempting to find a safe selection on the menu. Dawn helped me read the menu as if I were already 80 years old. As I mentioned the number I wanted, the waiter began asking me a series of perplexing questions, some of which convinced me he might have killed the actual waiter and took his order book as a cover story. To add insult to injury he then asked me to read verbatim the combination I had asked for by number. Also, these don’t allow substitutions, so I was confused. After being polite, I told him to bring me whatever the cook thought belonged on #3 and that such a course of action would be fine with me. (He had visibly flinched when I asked about ‘tacos de alambre’ and similar items.) When my alarm bells begin to sound, I always opt for plates containing no meat. It’s a lesson Dawn is slowly learning, too.

My wife foolishly ordered a selection with grilled chicken fajita meat on it. When the plate arrived, she was surprised to discover that they had used what I now call “squirrel chitlins” instead of chicken fajita slices. I’ve come to learn that restaurants that use the chicken pieces which resemble small sections of curly french fries can’t be trusted. Using that type of chicken under the guise of grilled fajita chicken is a dead giveaway that cost has surpassed quality as the main guideline for inventory. In NWA, I stopped getting my favorite dish and then abandoned my favorite restaurant precisely because of this. Dawn initially ate with the enthusiasm that hunger demands but her enthusiasm quickly faded as the texture, flavor and strange aftertaste of her meal overwhelmed her hunger. The sour cream that had been added to her plate was runny and tasted like it had been left out for an hour. I won’t critique the guacamole in fear that the Avocado Mafia will kill me for my honesty.

Dawn found almost nothing savory to eat from her selection. She picked at her plate like a spoiled turkey buzzard might after discovering a whole pizza on the road. The waiter never returned to ask us about chip refills, salsa, or drinks. It might be a good thing, though. Dawn might have had commentary. She knows better than to return food except in emergencies or to ask for something else. He was around us, though. I watched as he moved around. I could tell that he was very concerned about his coworkers needing him to help them or to bus tables, even though there were 3 buspeople on duty. Dawn was showing a little frustration, something that’s unusual for her. I already knew the waiter wasn’t coming back absent a lassoo in my hands. I tried to get Dawn to accompany me to the front register to expedite the process. It took the waiter 4 or 5 times to actually have our ticket. For me, it was hilarious. Dawn wasn’t amused, especially at the part regarding me finding hilarity in the failed dining encounter. She just wanted out of there instead of being forced to look at the inedible carcass of her food selection on the plate in front of her. Even as Dawn attempted to pay at the register, she didn’t know how to answer the cashier who asked, “How was it?” I dared not turn around, lest I pantomimed sticking my index finger down my throat. Adding another insult to injury, the payment system didn’t allow her to customize her tip. Only 3 high-tip options were available. Instead of asking, she chose the lowest with a grimace. Dawn, like me, is normally a great tipper. We both found it appropriately hilarious that the one time we might have tipped badly, the restaurant’s payment system didn’t allow her to do so. We added this observation of our list of signs that a place might not deserve to survive.

As we left, I snapped a selfie of us, as I was riffing jokes about “What could go wrong?” Evidently, the universe had kept the tex-mex eatery in business to provide an answer for us. So, even though we had just survived the culinary equivalent of an equestrian kick in the crotch, we laughed as we walked away. The numbness faded from our tongues within an hour, even though our stomachs saluted us well into the night.

The good news is that Dawn now completely agrees with my rule regarding fajita chicken strips coming to the table disguised as squirrel chitlins.

I’m not calling out the restaurant by name. I want you to accidentally discover it one day. You’ll know if you have. Something primordial will trigger in your lizard brain. Your first instinct will be to call 9-1-1, if you’re still conscious. P.S. Fight or flight. I suggest you run if you remotely suspect you’ve entered the place in question.