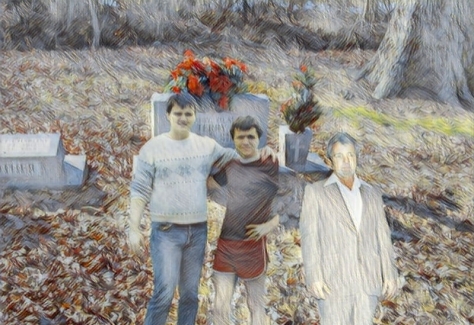 All my life, I’ve resisted the revisionist tendencies of much of my family. I revolted against the idea of secrecy and shame. Each of us makes our own decisions and is responsible for the consequences. People misbehave and make terrible decisions.

For the first time, this morning, I wrote, “every person in my immediate family has struggled with the demons of alcohol, drugs, or violence.” Some of their stories weren’t mine to tell, even as the consequences boiled over and tainted my ability to live a good life. Over the last year, I learned that my brother, despite his stunning intelligence, has been a victim for much of his adult life. On the Terry side of my family, every person in my immediate family has led a double life. Many have died prematurely as a result. Just writing this paragraph might have earned a beating in the not-so-distant past. The revelation that some of us lead secret lives (or smaller lives) controlled by our lesser natures is one that seldom gets a warm embrace. We prefer to hide our shadows away from questioning eyes.

None of this is a secret. Everyone close to those family members knew, of course. That’s part of the corrosiveness of alcohol or addiction. Part of my adult fight was trying to reconcile the fact that so many people stood by on the sidelines and angrily pushed me away as I tried to be open and honest about my parents and their brutal hidden lives. It’s my story to tell because I have an equal right to share my steps.

Since I was little, I’ve joked that I must have brothers and sisters out in the world. My dad was unfaithful in every sense of the word. He had notorious affairs with several people. I knew that one day I would be able to say with certainty, “I told you so,” even as a couple of my aunts and uncles angrily told me to shut up. “You ought not to talk about that!” Equally true is the fact that my father ought not to have behaved that way. People close to me have heard me say that my genetics are an infection. I don’t say it with disrespect toward my brother and sister; it’s a fact that is sustained by the carnage of our lives.

Years ago, I started genealogy. I didn’t think it would be interesting to me, even though I love to research. It opened a world to me. I helped many people find lost loved ones, discover their birth certificates, and unlock countless mysteries. Many of those mysteries were buried – or so those involved foolishly thought. I participated in the DNA system early and with optimism. DNA is the blueprint of truth that people can’t control. It is the genie which relentlessly tells us the truth, despite what those who preceded us might have written as history. Alongside DNA, I began to discover the historical record that buttressed my claims about my past. Much of the record contained people’s accounts of crime, abuse, violence and sometimes proud moments. Several of my aunts and uncles died before I compiled a record that would make them wince.

History devours all of us incrementally.

As the unofficial family historian, I’ve never shied from directly admitting what happened behind closed doors. It’s caused some discomfort and anger.

After years of relentless diligence, it finally happened: through DNA, I discovered that I have a half-sister out in the world. This discovery just happened. It’s raw and fresh in my mind. I can’t imagine what my half-sister is experiencing. I have a million questions, of course. Luckily for her, she can use my ancestry treasures and written accounts to jump right into the lives that she wasn’t able to experience. I warned her that demons possessed my father. I’m not one to gloss over the terrain that makes people uncomfortable. I’ve given my dad a long eulogy, one punctuated by bitter truth.

Her mom was very young when she was with my dad. The liaison happened in the early 70s after my dad was in prison and had returned to Monroe County, Arkansas. He’d barely survived a DWI accident that killed my cousin. I know nothing about my new half-sister’s mother or other family. It’s probably best at this point as she comes to terms with unintentionally finding an entire family in the world.

I don’t have all the details. Part of the uncertainty is that the woman in question didn’t expect to ‘find’ relatives, much less someone like me with a full arsenal of DNA results and extensive family history for her. I don’t even know her name yet.

Ironically, I found confirmation on Father’s Day, a holiday that was no more real than a unicorn in my family. My dad died over 25 years ago. He would laugh. Whether that makes him human or a monster I’m not sure.

I am both confused and happy. Most of my glee is for my half-sister who found the road she was seeking. What she does with it is entirely her choice. That’s entirely the point of DNA and family history. None of us had a choice regarding who brought us to this world, and many of us would desperately love to be able to change those choices. It’s not our fault. Whether our parents were doctors or assassins, we are guiltless in our existence.

I wish I could grant amnesty to all those children who grow up feeling responsible for the people behind them.

For those of you who have good families, it probably seems a bit exotic to think about these situations. Many of us flee in self-protection from our family. All of us would prefer the warm embrace of people who value and love us. Unfortunately, much of the world operates on a stranger wavelength.

It’s no insult to say that my original sister and I are incompatible. I’m not one for anger, drama, and instability. It might make her angry to see this truth written out – but it is true in a way that no one can deny. As for my brother, he wisely moved away when he was younger. Over the years, our connection lessened. A few years ago, we went through an intense and disruptive episode that broke something in me. I didn’t know at the time how much he was suffering from addiction. I knew but didn’t ‘know,’ much in the way that each of us later wonders how all of us avoided connecting the painful dots.

Now that the day has come that I might have a connection to another sister, it is news that I can’t share meaningfully. Mom and dad are both dead. My sister is in exile for my sanity, and my brother is struggling merely to live another year.

You might say, “None of that is your place to say, X.” You’re wrong, though. I have earned the right.

I don’t know what, if anything, will come of my discovery of a new half-sister. I wish my brother Mike were in his right mind, though. We share a deep and incisive bond of dark humor and irony. Since he’s been at the brink of death, he has passed a lot of time with me recounting the old stories. Shared history acquires a more profound meaning when you realize that your time in it is diminishing rapidly. In the last few months, Mike has read all my family lore and stories and relished them. He knows how strongly the gravity of what we came from has affected us.

I hope that my new half-sister waits a long time to meet my original sister. While I am by no means able to claim normalcy, I’m foolishly confident that I am the best ambassador to the family.

To anyone reading this, I hope each resists the urge to ‘find’ my new half-sister. She gets the right to decide when or if she opens the door. I wish her peace regardless of her timeline.

To the new half-sister I don’t even know by name, I wish that Father’s Day were one of joy for you. I wish that life had been different for us all and that all of us could sit at a table and wonder about what might have been. Each paid the price of our common ancestor. We never stop paying.

We also never stop hoping, though, either, not if we share a common humanity.