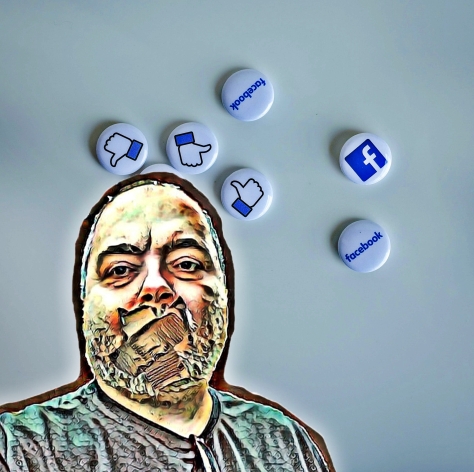 Another study supports the contention that social media can cause some people to experience lesser lives. The tendency for people to share only the glittering moments with their cohorts erodes the fundamental and inescapable reality that life is often a mouthful of houseflies. Not only do people share an incomplete narrative of their lives, but they also portray unrealistic body images. While people often lie, mirrors don’t. It’s half the reason we almost don’t recognize people when we encounter them in real space and time.

As for me, I try to prepare people for the inevitable letdown when they meet me by truthfully comparing myself to a taller version of Danny DeVito. The mistaken idea that we must be beautiful is a strange lie. Time bludgeons most people with casual disregard. It’s no accident that the people who we most often label as beautiful after a certain age tend to share the ability to laugh often and often at themselves.

Many people lose the ability to distinguish between daily reality and the personas crafted by social media. As we age, we discover that most people spend much more time on the couch than they admit and tend to suffer the effects of gravity more than they’d care to admit. Sure, people like frou-frou cuisine, but they most often dine on ramen noodles, hastily prepared sandwiches with the dregs found in the refrigerator, or fast food that looks like what a hungry teenager might request after a hangover.

I had stopped at the Harp’s on my side of town after work on a Tuesday afternoon after work. It was around 1 in the afternoon. Nearby, a mother and daughter were shopping for something for supper. I don’t know why the daughter wasn’t in school, but I suspect she might have been ill. I’m paraphrasing the conversation. And yes, I was eavesdropping. I was on the spaghetti sauce aisle, looking for light alfredo sauce. I prefer it because although it contains two million calories, the word ‘light’ in the name allows me to pretend I’m eating healthy.

I overheard a mom berating her daughter for posting something ‘negative’ about the family’s life. The daughter had posted something about hating her school schedule because of how mean several of her classmates were.

The younger daughter stared at her mother with a bit of incredulity. “So you’re saying ‘Be positive,’ right?” She asked.

“Yes,” snarled the mom in response. “All that bad news and negative energy drags everyone down.”

The daughter anticipated this sort of response. I almost applauded her, like an episode of Ally McBeal. “Then explain to me how you spent over an hour talking to four different people, complaining about everyone and everything. It’s the same thing. You’ve infected those people with your bad news and criticisms.”

The mom spoke too quickly. “Well, two of them were family members.”

“So, you’re saying that talking about negative things hurts people, yet you support your argument by telling me that it’s okay if you talk negatively in your family life, the very people you hold the closest? But it’s not okay for me to share less negative things online, with people I rarely talk to? What’s the point of social media if a bit of honesty isn’t ruining all the fun?”

“Keep it off social media, I said!” The mom had become a little pissed off.

“Well, keep it out of my ears, baby boomer. Positivity doesn’t mean quite what you think it does. Facts aren’t positive or negative. Our reactions are.”

I think it’s obvious who is considering the implications of her behavior more closely than the other.

I gave away the fact that I had overheard by nodding toward the purported daughter and laughing. The mom noticed me standing in the aisle with five jars of light alfredo. My wife later was surprised by how many jars I had purchased. I kept picking them up in order to be able to eavesdrop the conversation.

Because I couldn’t resist, I said, “I think I’ll put this on Facebook.” The daughter laughed.

Even if you’re only positive that almost everyone suffers a similar array of deep valleys and high peaks, and often on the same day. Stop curating your reality with such perverted diligence. It’s no feat to imagine what you’re not sharing, precisely because of our shared humanity.