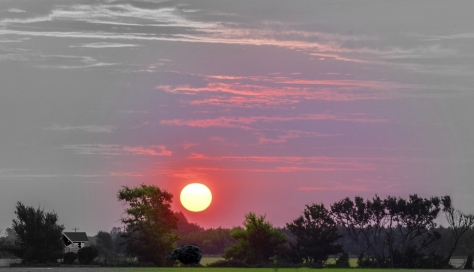 Josh stood on the embankment of the fifteen-acre catfish pond, watching the sun touch the horizon. The Phillips Brothers recently constructed this particular pond, and it was still devoid of fish. Thousands of dragonflies and insects flew above it. Now that Josh owned the land by birthright, he was confident that fish would never swim in it. Soybeans were the future for Josh. He’s seen enough catfish and live-haul trucks loaded with contraband to last him a lifetime. It wasn’t his place to judge his father and grandfather for their choices in how best to make money. How much money did a man really need, though?

He could see the Rawling’s house in the distant break in the treeline past the expansive rice field, beyond the edge of the series of catfish ponds stretching out to one side. The Rawlings clan were as mean and loyal to one another as any family in the Delta. All eleven of their kids were adopted. They were the closest neighbors both by proximity and character. The Rawling’s didn’t put fences around their properties. Anyone foolish enough to trespass ran the risk of disappearing into the swamps of Monroe County. Most people weren’t aware that the Rawlings single-handedly funded the Delta College Fund. It paid for college for a dozen Monroe County residents a year, provided each graduate came back to live and work in the area. No one dared break their promise to return.

Josh’s ears still rang with a muffled, high-pitched whine. He reached up and pulled off his hat. His grandfather (who he called Grand-pére due to his grandfather’s vague French past) gave him the hat the day he turned 18. He then poured two shots of whiskey. After they both downed their shots, his grandfather shook his hand and then threw a punch at Josh’s nose, a jab which Josh barely side-stepped. His grandfather laughed and said, “I guess you’re quick enough, after all.”  Josh suspected that his Grand-pére moved to Arkansas to escape the choices he’d made when he was younger. While he missed his Grand-pére, he also felt lighter in spirit after his passing. Some people cast larger-than-life shadows; things seldom flourish in the shadows. On a whim, he flung the cowboy hat into the pond. It lay flat on the surface for a moment and began to slowly sink into the surrounding water.

After a minute of observing the approaching sunset and listening to the muffled crescendo of insects calling, Josh held up the Colt 1911 pistol in his left hand, surprised to see that it had a splash of blood on it. The Colt was a gift from his Grandma Eva on his eighth birthday. She claimed that she had used it to kill two men when she was younger, a story Josh didn’t doubt, especially since whispers of it reached his ears through the years. He had dared to ask her about it once. Instead of addressing his questions, she enigmatically said, “Death is a private matter. I think you’ll find out for yourself if you live long enough.”

He had fired the gun at least a thousand times in the intervening years. The first time he fired it at another person, he killed the man who had already fired a shot at him and missed. The County Sheriff had walked up to him and slapped him on the back. “That was some fine shooting, Josh. Let me know when you want to come work for me.” The newspaper wanted to interview him and print his words under the headline “Local Man Saves Neighbors.” Truthfully, he felt nothing when he shot and killed the would-be robber at the Save-A-Lot grocery store. He was driving by the small store on Adelade Avenue when he saw a young man leaving the store and firing his pistol into the store. Josh didn’t think about what he was doing. He stopped the truck, stepped out, and waited until the robber turned to look at him. The robber lifted his gun and fired one shot. Josh calmly raised his pistol and shot him through the right eye. He found out later that the robber was his third cousin, Johnny Ray Terry. Johnny’s father shook his hand at his son’s funeral and nodded his head. Josh felt like he owed Johnny’s family a little of his discomfort. Being at the service afforded anyone with a grudge to say words or throw their punches. Waiting for other people to do what they had to always led to more problems. As his Grandma Eva would say, “Get down the road as quickly as you can. It’ll save you a lot of steps.”

The second time he fired his beloved gun at another human being with murder in his heart.  He couldn’t muster up regret for either occasion.

Barely ten minutes ago, his dad had looked up from his place at the rough wooden table. The table held a map of the county, a pile of legal documents, and a bottle of whiskey. He looked up. “Don’t point it unless you’re going to kill the person at the other end of the barrel,” he coldly told Josh. He didn’t seem concerned that Josh was pointing a pistol at him. The irony of his dad failing to realize that he violated his own rule earlier in the afternoon didn’t seem to register as he spoke.

Josh did not wait for his dad to say another word. He squeezed the trigger and the Colt, less than two feet from his dad’s face, fired directly into his dad’s forehead. The boom inside the cabin was thunderous. Josh carefully placed another pistol, one taken from his dad’s gun cabinet, on the floor. His dad fired it a couple of hours earlier, outside, as Josh walked toward the cabin after getting out of his truck. Instead of returning a shot, Josh had turned and walked the perimeter road of the property. It didn’t even occur to him that his dad might fire another shot toward his back. In his heart, he already knew what needed to be done. If a man tries to kill you, he’ll never relent if you let him walk away.

His dad slumped over on the table by the time Josh’s hand touched the front door of the cabin to leave. Josh walked across the yard and then crossed the access road to reach the closest of the catfish ponds. Mosquitoes accompanied him on his trek. Josh ignored them. Everything must eat, after all, and suffering inevitably resided alongside survival.

Josh flung the Colt pistol high in the area, and it landed about halfway across the pond, splashing neatly.  He knew it would stay there, half-buried in the sediment at the bottom of the pond until it would be recycled and replaced after its ten-year lifespan dwindled.  Grandma Eva would want the pistol to be lost to time, of that he was sure. Her death six years ago seemed impossibly distant. Cancer tried to kill her for eleven years, starting in her chest and invading anywhere it could. It took a freak accident to beat her. Until yesterday, Josh didn’t know that his dad was responsible for the accident.

After today, there would be no inquiry, no hard questions, and no suspicious glances, even if someone suspected the truth. In quiet places where time slows to a crawl, justice has its own rules, ones independent of the wider world. Josh hadn’t murdered his dad; he simply paid forward the cruelty his dad had birthed by killing his Grandma. Most people can respect such decisions in their hearts. Josh wasn’t one to justify the distinction between greed and love.

As Josh’s ears began to absorb sound again, he could hear the shattering wall of insects making their nightly melody of chirps.

Life would go on, and the fables and stories would intensify, just as it always had in this quiet farming community.

Josh used the wall phone in the cabin to call Sherrif Medford. “Yeah, my dad is dead. There’s no hurry. I’ll be here waiting on the porch.” He hung without waiting for the dispatcher to respond. He didn’t look back toward the table where his dead father slumped. That part of his life was finished.

He would change clothes, clear the table, swim in the pond, and coat his hands with diesel first, though. Finally, he’d sit on the porch in the Arkansas night, waiting for the rest of his life to begin. Josh couldn’t wait for the land in front of him to fill with soybeans and a peaceful life. He was thankful for the promise of the static of a normal life.

Grand-pére would find all this amusing, fifteen years after his death.

Beyond, Monroe County made its descent into night.