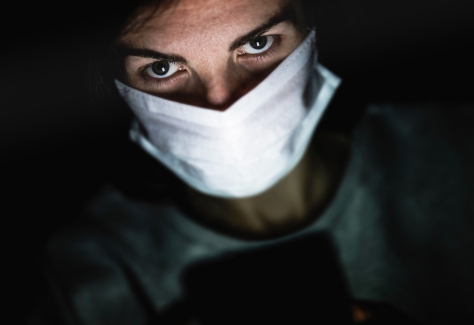 If you’re being screened for COVID19 and you see that the screeners are using temporal (forehead) thermometers, you need to check your temperature with an oral thermometer. Despite what some might say, an oral thermometer will eliminate environmental variables, assuming you haven’t been chewing whole ice cubes. While the absence of a fever doesn’t preclude that you have COVID, it occurs in the majority of cases. I’ve personally witnessed a 2 or 3-degree temperature difference between oral thermometers and other types. (*Generally speaking, of course.)

If you don’t own a pulse oximeter, you should purchase one. If you are infected with this virus, the flu, or have other health conditions, your 02 level is one of the single biggest ways to answer the question: “Should I be concerned?” It will signal that you’re deteriorating or at what point you need to call 911 or go to the doctor/ER. You should buy one of these even after our current virus crisis is over.

Additionally, the number of medical people being tested is artificially limited by how willing screening clinics are in administering the test. All those saying we haven’t tested nearly enough people are correct. You would be surprised by the number of people refused tests, even those working in the medical or emergency services fields. We don’t want to squander tests needlessly, of course. With anyone in the medical field or those who must be ‘in’ the world on a daily basis, it should be automatic with symptoms. The same guidelines for the general public don’t translate to dealing with medical workers.
.

In Northwest Arkansas, there isn’t a big scarcity of testing kits available, compared to other regions. Our bottleneck seems to be the number of labs at our disposal to perform the lab tests. Some people are still being told it might be a WEEK before getting their results. Senator Rand Paul had to wait 6 days for his, and he’s a United States Senator, and he didn’t self-quarantine during that time. (That’s not a criticism of Senator Paul, by the way, in part because he is a Senator and his job duties are critical. *Someone correctly pointed out that he did go the gym and do some stupid things in the meanwhile, though.)

If you are tested, you are now required to self-quarantine until you get the test results, which is of course an improvement over the previous policy. However…

Those who have symptoms or are turned away then return to their jobs or their families, often with the misguided belief that if the screening methodology indicates they don’t need to be tested, that they are in fact, not positive and pose no risk. For the purposes of this post, assume that those who are turned away or discouraged from a test work in the medical field or another field in which their presence is ‘essential.’ They return to their lives, potentially infecting many more people. ‘Not tested’ does not equate to ‘not infected.’ For public health, these cases should be treated as positive, even absent a test, as it is the safest course of action for society as a whole to prevent needless spread of the virus. In a crisis in which the virus spreads so easily, it’s obvious that anyone working in a critical field should be tested immediately, even if their symptoms only include a fever – but do not rise to the critical level. If our medical system did become overwhelmed, which I do not think it will here in Northwest Arkansas, we’d have to reexamine that policy.

If you’re already quarantined, this won’t affect you on an individual level.

By not quarantining even potentially suspected cases as they arise, we’re creating an expanding circle of exposure. (Obviously, I’m referring to those who can’t be at home each day.) We all know that we’re almost all going to eventually be exposed to the virus. It’s not about being able to sidestep our eventual exposure. All of us will ultimately step up to the fact that we’ve been exposed.

Another concern that people are misunderstanding is the tendency toward a false negative test. (You have the virus, but the test shows that you don’t.) A false positive might scare you, but at least you’ll think you have the virus and take immediate and drastic measures to avoid spreading the disease. In the case of a false negative, the opposite occurs. Given the way the tests are performed, the margin of error is actually quite high. If you google “Bayes’ Rule for COVID19,” you’ll see that false negatives are the biggest threat for how we deal with the virus.

The truth is that many organizations say that all those tested should be quarantined on the side of caution, even though who are tested negative. In the short term, it may cause needless isolation. That needless isolation of critical medical staff will statistically reduce the spread of the virus. We already know that up to 1/3 of all negative tests are incorrect, depending on the variables in the testing system. For every 100 people testing negative, it is possible that 30 of them are actually positive.

After having said all that, a significant portion of the population has been infected and has no symptoms at all. It gives us a sense of false confidence as we proceed with our lives.

Even though you’ve not read my definition of a public place, here it is: any place outside your house where anyone other than the people you’ve been with for the last 14+ days has breathed. If anyone ‘new’ has entered your house, your house is public for 14 more days.

I don’t personally feel alarmed, even if it kills me. Many of us all are doing to do everything perfectly. Yet, it’s going to hurt someone of us badly. I read your posts and hope that we can get back to being pissed off at each other for stupid reasons.

We’re going to get a vaccine, eventually. It won’t be permanent, though. We’re going to need to invest in and trust researchers and science. We’re going to have to stop pretending that anti-vaxxers have a valid viewpoint. Maybe we’ll finally get universal healthcare. Maybe we’ll manage to achieve a cohesive non-profit nationwide collective of clinics and hospital making decisions from the viewpoint of public health.

Our hospital system will not be overwhelmed here locally. I also don’t think we are going to run out of PPE or necessary medical equipment. You would think I’d be cynical about this. I’m not though. I think we are incredibly more prepared that many areas around the United States. No matter what happens, I hope you remember after all this that I was optimistic in our ability to diminish the impact.

We’re lucky we live in Northwest Arkansas. Comparatively speaking, it’s a great place to be quarantined – and an even better place to be if you find yourself needing immediate medical care for the virus. We have an incredible confluence of food, resources, and medical clinics/hospitals to help us get through this.

P.S. Although a few people missed it, much of my post indicated it referred to those in the medical field or those who go out into the world because they are ‘essential.’ Taking this into account quells many of the comments people might make. ‘Err on the side of caution’ is a cliché precisely because it is true and fits the commentary here.