—NOTE (Below) : Misleading Title from a worse Facebook page— 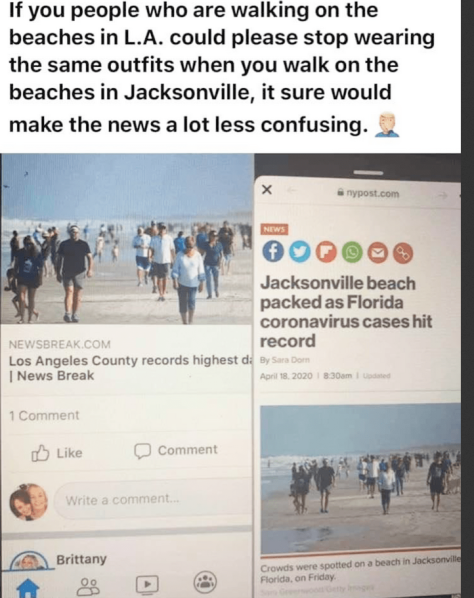 The fake posts by social media users abated. Inexplicably, I had TWELVE repostings between today and yesterday. I don’t know whether people suddenly became more stupid or if those running the conspiracy and fringe social media sites upped their game. It could be both – and often is. It’s no secret that people are often both stupid and lazy. How they could have missed the countless debunkings though, is beyond belief.

I don’t know why I’m still so surprised that otherwise smart people don’t check what they share. By uploading an image to Google Images, I can usually see what portion of its usage occurs on conservative vs. alleged liberal media. If it’s mostly one side, it’s probably drivel, whether shared by liberal or conservative.

The picture with this post was debunked a couple of weeks ago. Despite this, those who can’t or won’t use their critical thinking skills continue to share it as it makes its way around the internet. There is no media bias, at least not as pictured. I’m not a fan of the NY Post, given its owner, but they used a properly credited picture of the beach. The other FACEBOOK page operated by News Break aggregated the story. The FACEBOOK posting used another image from the same website. The NY Post website did nothing incorrect here – and neither did the News Break FACEBOOK page. A few politically-influenced social media sites have continued to improperly report the juxtaposed images in support of the incorrect and erroneous claim that its proof of the elusive media bias that evidently occurs everywhere. In turn, people who are inclined to believe such claims outright, even in cases that are demonstrably not evidence of media bias, share these posts ad infinitum.

What the picture does expose is the ever-growing need for people to use social media to share their own words or ideas. It insulates them from being ‘had’ by the very media they claim they can either trust or not trust. By continuing to share such incorrect stories, they themselves become guilty of what they accuse others of doing. By presenting every word and image on their page as their own, the worst that can be challenged is their opinion. Posting/sharing what others produce exposes them to scrutiny and being fooled by partisan or cause-oriented falsehood.

If I sound a bit irritated, it’s because many of the people who are shouting the loudest about ‘fake news’ or the unreliability of the media quite often use questionable sources to get their ideas, especially social media sites. No matter how often I point out that they are being victimized by their choices, they, of course, get irritated and angry. No one enjoys being asked to correct provable wrongs. On the other hand, that’s what responsible people do: they correct errors and push back against ego preventing them from saying, “Oops.” Sooner or later, we are all going to repeat/share/post something that is literally wrong. How we respond when someone points it out is the single biggest determinant of whether we are capable of discourse and conversation. Along that line, the safest thing to do is to avoid sharing something that you didn’t create. Doing so and then digging in when it’s pointed out that it’s wrong tends to lead people to the conclusion that discovering what is essentially true or right isn’t high on your list of priorities. Above all, always be very cautious about sharing an alleged news post from a Facebook source. They are notoriously unreliable. I have hundreds of them blocked, both conservative and liberal alike. Likewise, I use LeechBlock on my browser to block a huge list of websites that are prone to extremism.

Granted, even though I meticulously pointed all this out, the odds of the outright false post being taken down approach zero. The people who make the “fake media” claim tend to ignore such requests at a rate much higher than their crazy liberal friends. It’s a hallmark.

P.S. Many users aren’t aware that some of their posts are flagged by Facebook as “FALSE” as they post them. If you show the poster that Facebook has done this, they’ll invariably shout, “BUT you know nothing Facebook says or does is true.” And then I’ll point out that the fake post they are arguing about was itself a Facebook post and that they are contradicting themselves. It’s a sublime moment; one of joy for me and seething anger for them.

I know I’m an idiot. In my defense, I don’t use other people’s websites or links on my pages. What you read is my opinion and interpretation. It’s not poorly-expressed as objective truth. It’s opinion.

One thought on “It’s Better If You Don’t Share”