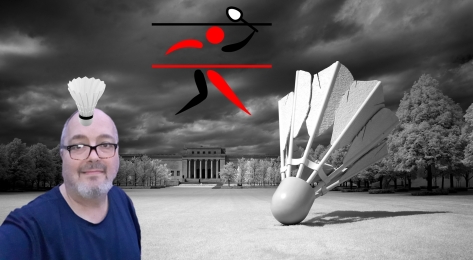 Many of us, especially those of us whiter than a bleached bag of rice, played badminton in our backyards when we were younger. Let’s admit it: we didn’t know what we were doing. Like a game of Monopoly, we made up the rules as we played. We ran into parked cars, brick walls, and probably smacked each other a few hundred times with the rackets. Sometimes, we even hit each other accidentally.

Whether badminton is a sport is obvious. The intensity with which you argue about this question itself serves as a reliable indicator whether you measure your ice cubes, watch the Harry Potter series with Klingon subtitles, or really ‘feel the burn’ when you walk fast to the garage for another 6-pack of spritzer water.

Joking aside, some matches have recorded hit speeds of 200 mph. Moreover, many people don’t know that the intensity of competitive badminton greatly exceeds that of tennis and typically requires twice as much distance covered per match.

If you already know the correct spelling for the word “badminton,” it’s likely that you also eat ketchup on your mac and cheese, not that there’s anything wrong with that, you psycho.

(Trivia Break) Gerbils can detect the smell of adrenaline in human sweat.

The game was invented in India in the 19th century after Lord Valdemort (no relation) noticed several of his servants waving swatters around in the boudoir. One of the servants accidentally threw a stuffed finch from the bedside display and the others began to swat it playfully back and forth. Although they broke several thousand dollars worth of vases and had to be put to death, the game was born. This entire paragraph is wildly inaccurate.

Despite my aversion to sharing facts, the name of the game owes its origins to the estate of the Dukes of Beaufort on which it was developed, rather than the once-popular theory that two drunk ladies intentionally kept pronouncing their illnesses incorrectly.

(Trivia Break) The Canary Islands were not named after birds, which I am certain most people don’t know. It derives its name as it passes through Spanish and Latin for “dogs.”

It’s no accident that the first 3 letters of the word cleverly telegraph the amount of fun you’re going to have while playing. While some people claim to enjoy playing, some people also like to eat raw hamburger and watch “The Bachelor.” People can’t be trusted.

The word “badminton” itself is offensive enough, but factoring in ‘shuttlecock’ and ‘racquet,’ and you have a guaranteed chuckle for anyone under 15 years of age.

Again, though I detest facts, competitive badminton is played indoors due to the fact that light winds can affect the shuttlecock as it flies. Whether those light winds are meteorological or gastrointestinal is a subject each family will debate on its own. Thanks to Aunt Maude for the chili.

The disadvantage of playing outdoors is that one runs the risk of other people observing you trying to play.

To my surprise, I discovered it is a summer Olympic sport. I presume it’s played as a literal reenactment of the movie “Dodgeball.” It’s the only explanation that makes sense.

When badminton first became an Olympic sport, over one billion people watched. While I like to joke about it, worldwide it is one of the most popular spectator sports. That still blows my mind, like discovering that you’re 14% more likely to die on your birthday than any other day of the year. (It’s true, by the way.)

A regulation badminton court is 20 X 44 feet, while the net is supposed to be 5 feet in the air. (And presumably connected to the ground, if you were wondering.) Attempts to replace the regulation net with a complex series of barbed wires were rebuffed, despite many advocates for watching the game demanding that barbed wire would result in a more entertaining game, much in the same way that baseball would be more enjoyable to watch if spectators could randomly fire pistols at those playing.

Even though you will think I’m making this up, a traditional shuttlecock or birdie consists of 12-14 duck or goose feathers – and those feathers are required to be from the left wing only of the bird, no matter what the bird might have to say about it.

Quoting from the official rulebook, here’s how the game is played:
1) Each participant should be motivated to play out of sheer boredom 2) Each player should have his or her own mosquito swatter or approved racquet 3) Alcohol or epilepsy help the game 4) Score is kept by constantly arguing about where the net is, how big the play area is, and how afraid you are of your family members. 4) The winner is declared when someone runs facefirst into a car parked too close to the net.

Sports Illustrated tried to do an article of the “5 Most Interesting Things To Happen In Badminton” and could only find one answer: “Nothing.” Not wanting to offend the Badminton World Federation (BWF), which coincidentally is a real thing, the editors instead ran an article mocking lawn bowling, which appeased badminton fans.

Given the competitive disadvantage of many sports, the truth is that a young person could do worse than attend a school with a competitive badminton team. If you can get a scholarship for bowling, Cornhole, fencing, rifle, water polo, and skiing, badminton is a great alternative. (All of those are real, sanctioned sports in the NCAA, if you thought I was joking.) For those considering playing badminton in college, you’ll be able to visit overseas, where badminton is incredibly popular.

One actual theory as to why it’s not as popular here sounds strange: sports that don’t utilize spheroid objects tend to fare worse both in participation and viewership. You might laugh at me to admit this, but this theory made me think way too long about the intangibles of this sort of fact.

In closing, badminton is a very physical sport. It’s much more popular than most Americans realize. Also, even though it’s totally unrelated, if you earn $20,000 a year, you are actually in the top 5% of wage earners in the world. That’s not made up, either.

P.S. I know this post is about badminton; if you read closely, though, you discovered a couple of crazy facts along the way. In closing, the average human body contains just enough fat to create 7 bars of soap.

2 thoughts on “A Wildly Accurate and Inaccurate Post About Badminton”