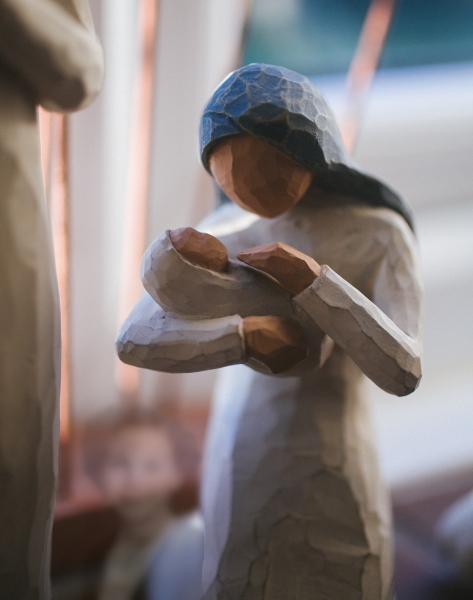 A recent conversation with my cousin, who is a writer and avid reader, made me ask where or how he gained his love for the written word. It also prompted me to think where I gained mine. The answer in a word is Mama. Thoughts of her and reading bring memories from my childhood flooding in.

When I was very small, reading was a huge part of my day. Mama read to me as a way of both entertaining me and lulling me to sleep for a nap. Her tone was soothing. Its sound was like a soft blanket wrapping around me.

As I grew, Mama returned to work, and I stayed with a sitter while my brother and sister were in school. It reduced my reading time, but it didn’t eliminate it. Even when she was surely exhausted and hated the thought of it, my mother read an evening story to me.

Each night, supper was cooked and eaten, the dishes were washed, dried, and put away, and then it was storytime. It was my favorite time of the day. Storytime was like my own special dessert. The anticipation of it through supper and cleanup tasted sweeter than any cake or cookies possibly could.

The routine was the same each evening. I picked a book, and we settled onto the couch. She always sat near the end where the light from the floor lamp made it easier to see the print regardless of which book I chose. I sat to her right as close as possible. That proximity varied based on the time of year and the temperature inside our small house. Winter temps meant I could get as close as possible; summer temps meant there had to be space so we wouldn’t sweat and cause our skin to stick together. On the cooler evenings, when I smushed myself into her tightly, I could feel the vibration from her voice cause a soft rumble from her body to mine.

I tended to choose longer books because, no matter the length, one story was usually the limit. Laundry still had to be folded and put away, and everyone had to have baths before bedtime. With five people and one bathroom, that was quite a process to complete.

No matter how long it took her to read the story, it was never long enough for me. Occasionally, if I had picked the same book too many nights in a row, Mama would suggest a different book. I knew that meant she was tired of that story, so I would exchange the book grudgingly. The disappointment always fell away quickly though—as soon as the first word was read.

That wasn’t the end of reading for the night though. One more treat was to come. After I was ready for bed, Mama or my sister would tuck me in, pick up the book Little Visits With God, and read a Bible story to me. After that, a quick prayer, and I was off to dreamland feeling safe and secure.

As I grew and learned to read on my own, Mama took me to the local library to pick out my own books. What a wonderful place! My first favorite moment was taking the first step inside the library door. It was like stepping into an entirely new world! The smell of books greeted me like the embrace of a favorite family member, and the spark of excitement that jolted and ran through me was like the joy of seeing your best friend at school after a long weekend.

Our library was, to me, one of the stateliest structures in town with its brick facade and three-story, white columns. You couldn’t tell from the outside, but from the front door, the library was down a flight of steps. Standing on the landing was like overlooking a magic land from a lush hill while fairies spun webs of glowing books.

As a teenager, I had a book in progress at all times. Books opened up worlds I didn’t know existed: places, people, ideas, facts, and so much more. They showed me a vast range of possibilities existed for my future outside the boundaries of the small town I was lucky enough to call home. Books even taught me simple lessons about myself. I feel you asking “like what?” One book, in particular, taught me that scary books really should be avoided altogether. An all-night-by-flashlight binge read of The Amityville Horror and a weeklong inability to sleep drove home the lesson books of that sort were, for me, best left on the library shelf. As a teenager, one book was even a source of tension between my mom and me. Mom, after noticing a Judy Blume book in my room and flipping through it, decided the story wasn’t “suitable” and threw it away without telling me. She then allowed me to search the house for several days and, only after I asked if she had seen it, did she inform me it was in the trash because it was unsuitable for me. I was furious but knew better than to argue, so I only told her with teenage sarcasm, “Thanks for letting me waste so much time looking for it.”

Not only was my mother the source of my love of books, she too was a voracious reader. Having a book in progress, for her, was like having the next breath of air ready to breathe. One time after she came to my bedroom telling me to help with supper, I asked why she didn’t call me from the kitchen. She replied she had done that three times already. Yet, she wasn’t irritated. I presumed she would think I had ignored her calls and questioned her. “Not at all,” she said and then told me a story of her own. When she was my age and engrossed in a book, she didn’t hear her own mother repeatedly calling for help from the kitchen. Suddenly, Mom was brought to reality by a handful of homemade biscuit dough whacking her in the head. From that point on, she chose different times—ones that didn’t interfere with chores—to read. From that experience, she knew I couldn’t hear her when I was reading, and I’m thankful for that realization. Premade biscuit dough in a can would have hurt a lot worse than that handmade dough did.

That love of books and the magic of libraries remain with me to this day. It is both a simple gift and a deep legacy handed to me by the person who loved me more than any person ever has or ever will.