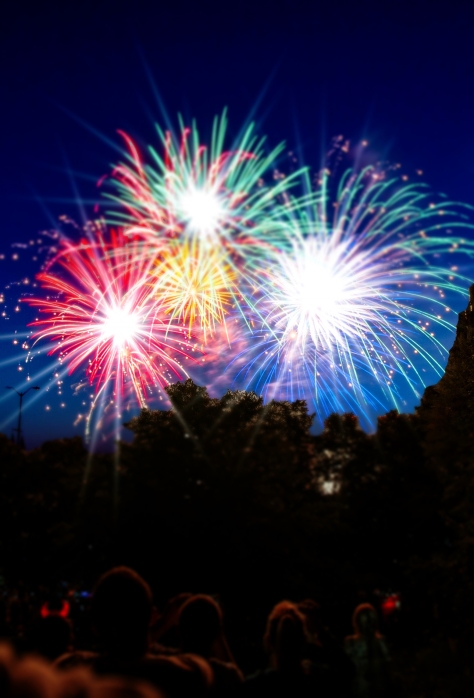 In a strange place, as dusk approached, I was alone, as if the world stood still. I heard echoes and booms. The frequency and intensity slowly intensified, much like a novice drummer tentatively using his sticks across the surface of a drum set. Peering through the window, I realized I had a front-row seat to a fireworks display at a church slightly more than a hundred yards from me. Because I was higher than the display, I had the best view in the house. It was a moment crafted just for me, though the dozens of spectators packed on the lawn and the parking lot behind the church would disagree. Before light succumbed to dusk and encroaching darkness, I could see the dozens of mismatched lawn chairs assembled in random order across the pavement.  I could see the dots of both adults and children restlessly moving around. Though they anticipated the commencement of the ceremony, I’m sure many of them realized how quickly it would come and go, much in the same manner as the days we take for granted overtake us. One of our modern curses is to be thinking about getting out easily after whatever event we’re attending is over; it is the opposite of living in the moment. “Parking prevails,” a wise man once said.

I pulled a desk chair in front of the large window and sat down to observe.

Because I continue to believe that 90% of our lives lie in the spaces between the grand moments, I couldn’t help but think that somehow I knew I would always remember this moment.

Though I’ve forgotten the majority of my incredible trip to D.C. with the band in high school, I’ll never forget the backdrop of the national fireworks display in the distance. Though we were confined inside due to rain, the moment was majestic and shared. We’d burned under the July sun earlier in the day. All of us were on an upper floor of the hotel. Perhaps the fireworks display I observed at Lake Atalanta 30 + years ago was more exciting because I was dangerously close to the firework system itself. I was within feet of it and found myself mesmerized by the colors and brilliant reflection of the charges on the shimmering surface of the lake as they exploded. As each charge fired, I could feel the heat and the tickle of the powder discharged from the nozzles.

This year, I had the best view, the best outlook and the most colorful advantage. In the background, the approaching dark skies blossomed with intermittent bolts of lightning above the horizon. Mother Nature competed against man and I was a sole witness.

It was an unplanned moment. Unplannable, really.

The subsequent booms and explosions of color ejected streams of dense smoke that floated slowly across to the west. The dark clouds behind and above seemed frozen in place, even as the lightning bolted from within. The smoke billows seemed artificially 3-D as they moved across the sky in front of me.

Across that same long horizon, I watched the dueling lights of the radio tower blink intermittently and the illumination of the coal electricity plant light up a small portion above the vista. Dotted all along the expanse were other fireworks displays, some large, some small, all equally observed by craning necks and fascinated watchers.

I could sense the anticipation of those at the church after so many confined moments and small rooms, behind masks, away from shared experiences.

This unscripted moment will not be rivaled.

Afterward, I watched the human dots and the lawn chairs as they dispersed back to their vehicles. I didn’t need to hear their private conversations to know the content. I now wonder why they didn’t remain there, congregated, and joined. Even in silence. The homes they’ve become too accustomed to in the last few months undoubtedly will echo falsely upon their return. How long will their memories of this exotic Fourth of July remain in their minds? Like the fireworks, things are moving explosively and with no preordained velocity, as if life must be packed into a single instantaneous moment that escapes our grasp. Amidst the temporary sizzle, all of us would probably agree that life is simultaneously on hold and flying past us with hurried feet.

Because you were not here to see, I’ll carve a tiny slice of my witnessed memory to share with you in the most imperfect way possible.

Now that everyone has departed, I remain at the window observing Mother Nature illuminate the dark clouds and the enveloping night with immense bolts of electricity. I feel that those attending the display should have remained to see this too. This eternal power abides restlessly and insistently, ignoring our movements with disregard. It needs no Fourth as an excuse; its power conjures a glimpse of a timeline so mammoth that it drowns out our concerns.

While I filmed both fireworks and lightning in their respective moments, I won’t share them with you. I’d like your imagination to fill in the gaps of what I witnessed, much in the same way I hope you fill in your life with as much curiosity and interest as these times permit.

The picture I used is not real, no more than the already-forgotten pictures you might have taken during the holiday. For me, the surprise and delight of experiencing fireworks spontaneously would overshadow the reality of data I could see. I stole that moment from a night otherwise absent such delight.