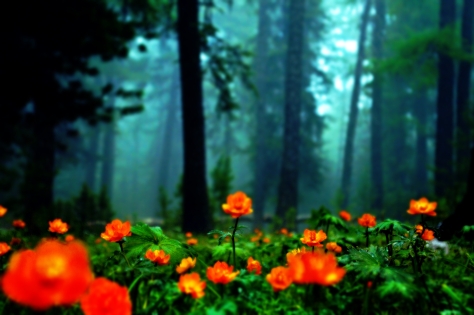 I walked through a dense, foggy meadow in the early morning. As I moved through the tall grass and flowers in the growing light, I walked across the meadow and into the stand of trees on the other side. The dense smell of foliage and trees lay heavy around me. For several minutes I walked. Finally, I stepped through into a small clearing. In the middle, a man sat hunched near a small fire. Above it, a metal coffeepot swayed slightly.
As I cleared my throat, he turned and laughed.

“Took you forever!” He said. “Sit,” he said. I walked over by the fire as he poured me a half a cup of coffee. I sat on the ground. It was covered with dry pine needles.

As I took my first sip of the aromatic coffee, he spoke:

“For anyone taking the time to share their stories and especially for those prone to self-doubt, here is the phrase you need to consider: “the voice in your own head never needs to stop to take a breath.”

Even while you’re hearing this, it’s likely that the narrator trapped in your skull is talking to you in ways that seem slightly out of your control.

If this happens to you consciously, imagine the number of ways your mind is interfering with you in ways that you can’t or won’t notice.

Most of us don’t hang around people who embody what we’re aiming for. Absent such examples, the people who’ve shouted into our periphery through life get the front row in our heads. When you’re taking the risk of doing something meaningful for yourself, you look out into your life’s audience and the first faces you see are generally those packed into the front rows. You didn’t choose them as your audience. Be wary of all those who are spectators to your life. They aren’t you and don’t know you.

Even if we imagine several people applauding toward the back, we tend to assume that they are outliers and aren’t seeing something that those who know us best see. The truth is that your entire life will be different if you treat the outliers as the ones who matter most. They see something in you that those nearest cannot.

Each of us is lucky if we have one or two cheerleaders in life. Most people are too busy with things in their own corner of the world to encourage you; it’s the daily grind of life manifesting itself by taking people’s attention.

When you consider that every other person in our lives has a different version of us in their head, it becomes easier to understand that we’re never going to be understood in the way that we ourselves understand what motivates us.

Equally true is the fact that many people are insecure and don’t have experience with authentic people or those doing things differently. Most are dialed into the common routes and expectations of what being alive is supposed to entail. We focus on the process instead of why.

People dedicated to doing their thing also tend to reflect back honestly to those around them. It’s evident that many people resent their reflections and respond defensively. Silence is easier for them, even though it lessens their time here. They’ll work hard to push you into silence, too.

It is a rarity for someone to stand on top of the pile of all these tendencies and forge ahead. Think of someone you admire. Whoever it is, they laugh often and always share who they are, no matter where that is.

If each of us could witness the totality of a single life from a distance, we’d see that most of the struggle is of our own making. We cannot win in the sense of winning that we’re taught. You don’t win by playing. You win by not playing by the rules other people demand of you.

The voice of doubt in your head is there for a reason – but not for a reason that benefits you. Make it pause and take a breath. Somewhere in that absence, you’ll discover the absurdity of almost everything we take for granted.

Whatever you’re here for, I’m certain that you can see that silence and uniformity make us all lesser human beings.

Your time is here is almost up. When you finish that cup of coffee, you’ll wake up and wonder why you dreamed of me. Soon after, you’ll look up into the sky this morning and see your life reflected there. There is only one you.”
…

The clearing dissolved to nothing. Despite having a box fan turned to ‘high’ and thunderstorm noise playing in the room, I woke up instantly. Outside, a single bird squawked raucously. Before I lost whatever it was that the imagery provided, I went and made a picture for a friend, one treading the line between reality and fiction. In it, I captured the essence of a world she needed most.

All because of the smell of woodsmoke, fog, and coffee in a place more real than imagined, inhabited by a strange voice that was my own.

4 thoughts on “Density Of Time And Place”