*I’m going to name my new insurance business “Asterisks,” because then everyone will read the fine print on my signs, no matter how small.
.
Note: this post started with an * because there is a business named Asterisk.

I decided to do an OnlyFans account which features me wearing a variety of sundresses. So far, 328 people have paid me NOT to do it. For my part-time job, I’m going to be a lounge singer, hopefully with similar results. Lack of talent, ambition, and looks sometimes pays.

“She said she was going to slip into something more comfortable. Little did I know it was a coma…” – X

Two things:
First, it’s a sublime thing to go to Tractor Supply to get an ax. Social distancing suddenly isn’t a problem.

Second, I changed my brake light and discovered that my car has an external trunk latch.

Anyone tempted to mock me for admitting my ignorance should review point #1.

…Wouldn’t it be better if microwaves counted down like a bomb timer on a tv show? And in 1 in 25,000 uses, a huge plume of smoke would emit from a secret slot at the top?

If you stand in the bathroom with the lights off and say “Michael Jackson” eleven times, you have a LOT of patience for delayed results.

Have you ever been in a room with zero doors?
.

…A bolt of lightning contains enough energy to toast 100,000 slices of bread, but evidently not enough to give a teenager enough willpower to pick up all his towels.

You can hear a blue whale’s heartbeat from two miles away and smell whether everyone’s bathed from the same distance.

Instead of saying “cheese” before taking a picture, Victorians said “prunes.” Smiling for photos was frowned upon. Note: that last bit was a joke that you probably missed.

Useful bit: cold water cleans as effectively as hot in the laundry with modern detergent. 75% of the energy used in a modern washer is from the heat of the water rather than the mechanics. Almost no one believes this, even those who attend Bigfoot Is Real conferences and people who think Beth didn’t make a million dollars from the Cadbury Egg marketing.

“How long are you going to spend NOT making supper?” This seems like it might be something to avoid saying inside the house.
(From the book, “Conway Wisdom”)

*If you want to feel like life is too short and flying by, go through the Whataburger Drive-Thru while on hold with Walmart Customer Service.

I watched the most recent remake of “The Invisible Man.” For jumps, it was well worth watching. I couldn’t be an invisible man. At my age and given both my fiber and probiotic intake, they’d hear me from 20 feet.

34,000,000 Americans smoke. That’s not statistical data. It’s how many people I counted outside the Dollar General today.

I thought my sister-in-law Darla was outside. My bad. Someone was using a blower on the sidewalk.

Weird that people give noise warnings. My Mom could produce 120dB just griping.

From my book of inscrutable text humor…

You’re right, he was a real heart-braker.
And no, I didn’t misspell that.

“Springdale Gives Away 10,000 Masks,” said the headline. The 50 people who wear them in Springdale will be very appreciative.

I laid awake last night, my mind racing with this question: how many vampires confusedly and excitedly signed up to work for Bite Squad?

If the United States is the world’s Florida, then Arkansas is Daytona Beach at 1 a.m. – and Springdale is the urinal closest to the men’s room door at Margaritaville Resort.

I’ve never been in favor of the death penalty – then I found out he was rooting for the preacher in Footloose.

In my remake of Dirty Dancing, as Baby runs to jump into Johnny Castle’s upraised arms, he’ll bend over to tie his shoe as she crashes over him. It’ll be the romantic comedy all craven-hearted men will applaud.

Getting old and losing one’s hearing causes awkward situations. When management announced the “New Mascara Policy,” I wore my heaviest shade. Bedroom eyes result in weird meetings. But I got two phone numbers from Steve and Bill.

I read an amusing thing today. Someone speculated that people living in the “A Quiet Place” universe probably died violently and needlessly while complaining that being quiet violated their rights. I think the fictional invisible killer has a lot in common with our current situation.

Practical adult wisdom: Don’t swim in a sea of despair; the lake of misery is a shorter drive.

For reasons I don’t understand, church membership dropped significantly after the installation of the new Baptismal Diving Board. 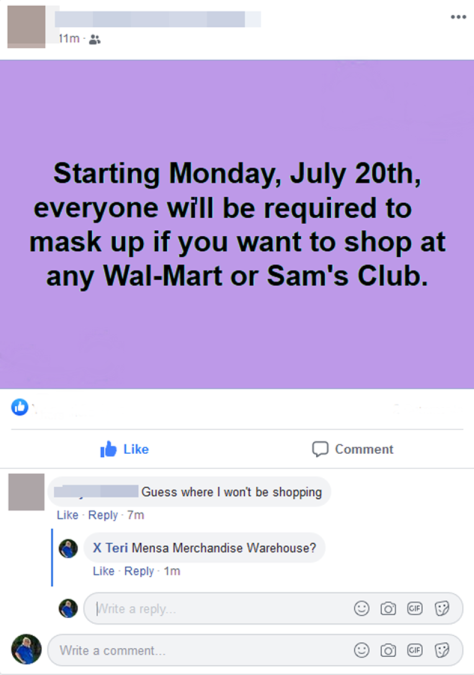 From my book of snark. I left the comment up briefly. After investigating the commenter’s social media profile, I felt bad, as he fell somewhere on the preliterate end of the spectrum. I removed the comment due to a suspicion that the person commenting wouldn’t appreciate the barb of humor – and that the person posting might regard it as hostile. What might have been…

“Noah get the boat” is a phrase that somehow escaped me until today. I’m going to use it often from now on.

“They were trained to spot stupidity by looking into the mirror.” I scrawled this recently somewhere and I am still amused greatly by my own wit. I probably should not have used my permanent marker to immortalize it, though.

I thought my sister-in-law Darla was outside. My bad. Someone was using a blower on the sidewalk.

One thought on “Nothing New”