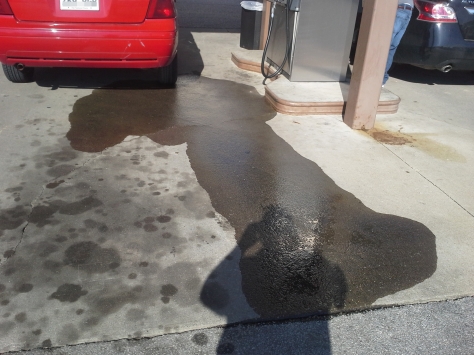 A few things to bear in mind: it’s very warm, very windy, and gas is less than $1.50 today. Those conditions are necessary to help explain why it wasn’t solely my innate stupidity that was at fault. (This time.) I was standing facing the gas pump, with the nozzle to my back and right. As the total cost went over $15, I thought, “Man, that wind is COLD” as the air felt like it was blowing up my right pants leg. Really – it suddenly felt super cold. It didn’t occur to me that it wasn’t the wind. I’m a genius like that.

After a few seconds, the gasoline smell was overwhelming. I looked around and gas was spewing out of my gas tank, even though the nozzle was completely inserted. Naturally, my brain froze, as did my hand. I stood there with a Monroe County look of idiocy on my face – a very common look for me, I’m told. Instinct finally took control and I grabbed the nozzle and shut the gas off. At the same time, I realized my shoe was indeed full of gasoline, and my pants were soaked.

I went inside and waited patiently as the clerk rolled her eyes in irritation at the two younger guys in front of me, who were bickering. Incidentally, they had pulled up to the pump to the East of me and were bickering as they exited their own vehicle. I watched them closely, as they both put on their hoodies, which I find isn’t very smart when entering a store. Honestly, I was wondering if they were going to rob the place. That’s my final excuse for being distracted, by the way: I was imagining robbery scenarios. One’s mind wanders when pumping gas.

When the 2 yahoos were done arguing with one another and paying, I told the clerk that the shut-off wasn’t working properly and a LOT of gasoline had spewed all over me and into the parking lot. Given the eye roll and the way she was sneering at the two gentlemen, I figured it was going to be a real treat to interact with her. I told her in succinct yet precise detail exactly what had happened and that both the parking lot and I were covered in gas. Her response: “Oh great, I guess I will have to go out and put down some cat litter.” That’s it. I gave her a moment, waiting for her customer service skills and training to kick in. When she said nothing else, I told her that I had checked my car and the nozzle and that the shut-off on that pump could not be trusted.

She didn’t have any comment, just a sigh of exasperation, so I departed, reeking of gasoline and my right shoe sloshing from being filled with gas. I took pictures of the spill and told the lady on the other side that the shut-off hadn’t engaged. I took pictures because sometimes the things I do or say are not exactly credible, given my penchant for either exaggeration or outright fabrication.

I stood there trying to decide whether to shed my shoes and socks and leave them there. It didn’t seem like a good option to throw my pants out, either, given the lengthy explanation that would be required by the Springdale police if they stopped me sans socks, shoes AND pants, regardless of how warm the day might be. I knew my car was going to be fume-filled, even though I live very close. I opted to keep my shoes on and to drive home. As I was about to leave, it occurred to me that it might be interesting to watch to see if a clerk would come out to throw chat and/or disable the pump pending it being checked for safety. No one came out while I waited, so I left, my eyes watering from gasoline.

I wondered how big the fireball would be if someone errantly discarded a lit cigarette out their window and into mine as I drove home and whether my wife would see the fireball from the office window.

I called Corporate Offices after experiencing a pang of guilt. I knew I couldn’t trust the clerk and be certain the pump would be put out of commission. The person I talked to was nothing short of exceptional and assured me she was dealing with every aspect of the situation. She and I were both laughing and I lied, saying I didn’t know the name of the clerk. The clerk was undoubtedly having a rough day, made worse by the 2 yahoos who preceded me at her register. If I could tell her, though, I would assure her that my shoe full of gasoline had been the perfect ending to an atypical Monday.

(The picture shows how much gas onto the parking lot, but doesn’t show how much went onto me. The aforementioned yahoos are still bickering before getting into their car, on my right.)