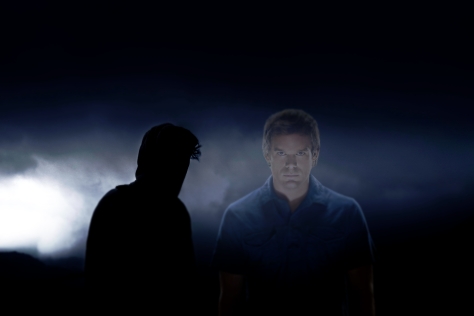 Starting with the most important point: Dexter will return for another season. I’m as certain of it as Michael C. Hall’s agent was when he recommended to his client that he make “Safe” for Netflix.

Dexter will haunt us again if no other reason than it’s going to be profitable for everyone involved.

Some of us have been fooled by fake promotional posters for the mythical Season 9 of Dexter. It’s easy to fool those who already long for such a scenario to be a reality. As for the studios involved, I can’t imagine that it wouldn’t be profitable for them to have a go at Dexter+ in the near future. I’m betting that it will be sooner rather than later. (Dexter+ is the name I’m recommending that the studios adopt.)

For the neanderthals walking among us, Dexter was a Showtime series featuring a likable vigilante serial killer in Miami.

In a testament to forgetfulness, I watched the entire run of Dexter again. First, I thought there were fewer seasons. Second, it’s undeniable that some seasons had some strange plot twists and contrived storylines. Good tv is forgiven the infrequent gaffe. Rewatching the show provided me with several instances in which I noted that the writers had dropped hints of possible futures for Dexter. None of them seemed relevant the first time I watched. Now that I’ve revisited Dexter, the infinite storylines available to great writers seems endless.

Now that I’m finished rewatching, my mind seems focused on the monumental things I’d forgotten – or had completely wrong. Many fans were incensed at the way the show ended. Lt. Batista never knew Dexter’s secret. Quinn survived, no matter how badly I rooted for him to get shot from a balcony. Debra, of course, is fish food.

I like to imagine Lt. Batista still at his desk, being the kind-hearted stereotype he always was. Debra, being eaten by the sharks in the bay as the currents move her back and forth. Dexter, sitting in his place in the Northwest, fantasizing about his next appearance in a Gillette commercial.

Of this I’m certain: there will be another season of Dexter. Showtime insisted that Dexter would survive the series finale, even as writers argued about whether it was realistic. His son Harrison would now be about to reveal whether he inherited Dexter’s affinity for mayhem. The story can pick up at any point in time, past or present and in any geographical location they choose. The real world still spins and no one substantive apparently suspected that Dexter was indeed a serial killer. His cover story could be amnesia or a mental break which rendered him incapable of returning to the life he was already leaving before Debra’s death. Lumen still lurks in the midwest. Hannah walks the earth, probably still free.

As with all good stories, the biggest obstacle is one of creativity on the part of those tasked with creating a new timeline for Dexter.

If you think you can shirk your duty to bring us another season of Dexter, you’re as foolish as Dexter was, each time he attempted to live a normal life.

The only trailer for the new season we need is this: Doakes at the boatyard, telling Dexter, “Suprise, m*********a!” No explanation, no cutaway, followed by a fade to black as the word “Dexter” enters and fades from view.
.