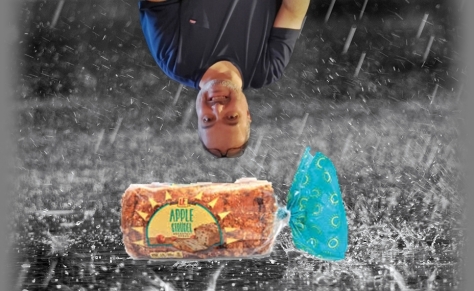 I started with the best of intentions: I stopped at Aldi to buy my mother-in-law another loaf of Apple Strudel Breakfast Bread. I first bought it for her as a whim. As such things go, the bread is pretty fabulous. It is with a begrudging spirit that I give any compliments to Aldi. I’m still very cautious about what I buy there. I will admit, however, that they offer a few things that aren’t available in other places. (Other than typhoid and a persistent rash, I mean.) I blame my friend Marjay for reminding me of Aldi. She shared a social media post yesterday about the dynamics of returning one’s cart.

Given that my job has a work limit allegedly due to the COVID crisis, I ran from my job with glee a little while ago. I should have paid more attention to the forecast. If not the forecast, I should have looked behind me as I drove across Springdale. There was a massive dark cell approaching. Had I noticed it, I would have driven directly home. I definitely would not have parked at the furthest part of the lot, either, something I almost always do when the executive committee chairwoman isn’t with me. (That would be my wife.)

I entered Aldi’s to buy three or four things besides the aforementioned delicious Apple Strudel bread. I ended up with a couple of dozen items and had to retrieve a shopping cart to carry them. It was at that point I noted the massive black wall almost on top of the store. Ignoring my instincts, I put my items in the cart and finished shopping. By the time the helpful cashier was throwing my items in my cart like it was an Olympic qualifying event, we could see the sheets of rain, as well as hear them strike the store’s roof.

I bought some bags, piled my stuff in them, and waited by the long window at the front of the store. My three or four items had blossomed into three large bags of food. Anyone looking at me would have thought I might be a huge fan of Aldi. It was a strange coincidence that today was my biggest Aldi haul in years.

There were several customers congregated along the bank of windows, all staring at the massive storm that greeted us. One woman with a full cart didn’t hesitate. She walked into the rain without wincing, unloaded her cart, and walked back to the front to return it to the corral. She resembled an otter that had just emerged from an overflowing creek. I’m assuming she is the mother of several children; only such unavoidable training could result in that kind of resigned demeanor. Additionally, she owned a minivan. It’s common knowledge that driving a minivan is tantamount to tacit approval to get drenched while doing the weekly shopping.

We watched one brave soul exit Aldi with a bag of groceries. In horror, we watched as he ran across 412. Anyone familiar with the danger would understand. Running across through rain so thick we could barely see across the street was an added element of lunacy.

After several minutes, I decided that the storm wasn’t going to abate. Pushing my cart ahead of me, I exited. As I crossed the main door, an unattended cart rolled by at a very fast speed, heading across the lot and destined to crush someone’s car. An employee cursed and then darted to get it. He was drenched by the time he came back. I half-ran, knowing it was futile. The sheets of rain hit me and surprised me by how cold it was.

At this point, I’d like to mention I hadn’t done my work laundry in a few days. As a result, I wore a pair of my old pants, ones with a much larger stretchy waste. I used my belt to tighten it drastically while I worked. Even so, my pants threatened to drop once or twice.

Because of the heavy rain, my pants drooped as I shuffled across the parking lot. As I half-ran, my pants, belt and all, slipped down past my gray underwear. I didn’t hear a round of applause from any of those employees or customers hiding from the rain at the front of the store. I stopped and got my pants to stay more or less and up and continued on to the car.

I crossed a river between the last rows of cars. The water reached my ankles as I crossed. As I opened the rear door of my car, I realized at the last second that the paper bags had become ornamental at that point. By sheer luck, I didn’t drop any of my groceries. I picked the other bags up like cannonballs and dropped them in the back.

Because why not, I walked my cart back up to the store. I told the employee, “My pants fell off on the way. My apologies for the unsolicited reminder to always wear underwear.”

Driving across Springdale on 412 was another adventure. Several vehicles decided to avoid the overflowing storm drains along the edge by driving in both lanes. I didn’t witness any accidents. While driving, I could feel the water puddling in my seat and on the floor.

When I arrived home, my wife had opened the garage door for me. I don’t park in the garage. I had to carry each of the three soaked bags to the inside of the garage one at a time, placing them on the concrete near the inner door. The rain was cascading across the roof of the car and hitting me in the face each time I opened the car door. Afterward, I wasn’t sure the garage door would close against the wind gusts and blowing rain. I had to strip out of my clothes while standing in the garage, surrounded by my valuable groceries.

Note: despite what you’d think, it is not romantic or sexy to watch your drenched husband bring in the groceries. I base this knowledge on the rapidity with which my wife exited the scene.

I could feel the loaf of Apple Strudel bread chuckling at me while I did. “Was I worth all that,” I’m sure it was asking me.

The cat’s been staring at the dryer strangely ever since I put my soaked shoes in there. He was so startled earlier when the shoes knocked the dryer door open that he bolted across the narrow entrance hallway at supersonic speed, smashing directly into the wall. His only comment was a strange, “Meowwwwwww,” even as he weirdly plopped down on the floor.

I can identify with the cat. Whether my greater error was in going to Aldi or doing so during a monsoon is up to you to decide.