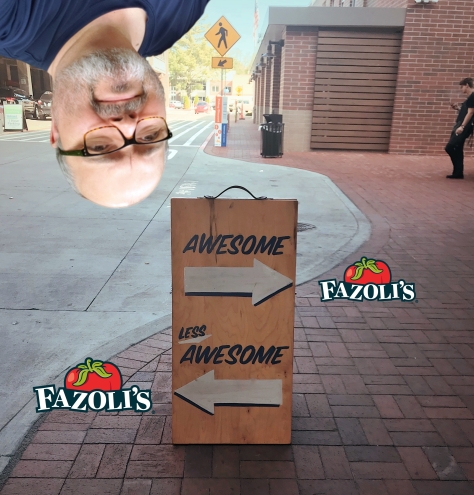 *
Many people don’t know that the apostrophe in the Fazloli’s brand name is actually meant to represent a tiny bit of flatulence and regret. I’ll probably get an angry letter from corporate when they read this. Their CEO is busy though, studying for his GED. By the way, I’m one of those weirdos who l-i-k-e-d Fazoli’s. I’m glad that the federal government opted to not require us to wear a special hat as a warning to others.

A friend recently hilariously recapped her working experience at Fazoli’s when she was young, shorter than a table lamp, and evidently 47% invisible. Working anywhere tends to force you to realize that some things are better off unknown. In my case, working at a dairy and seeing clumpy black milk being put into the holding tank ruined me for milk, not that that I was huge fan prior to that. I couldn’t look at milk, knowing that it contained filtered cow manure, urine, and things best left unmentioned.

At its high point, Fazoli’s made it to 400 locations. Northwest Arkansas had several. While I don’t trust my memory, it seems like our franchises went under due to personal financial issues with the owner. If I’m wrong, I apologize. It was a sad day for gourmands like me when they shuttered their butter-infused doors for the last time. During one visit to the location in Fayetteville, I overheard someone tell the manager that “Fazoli’s is the People of Walmart  of fast food.” I laughed then and it still amuses me.

I’ll be the first to admit that Fazoli’s was the bologna sandwich of Italian food. Given that my primary requirement for pasta is “quantity over quality,” I loved Fazoli’s. Just to be clear, I didn’t care if the pasta was made from reconstituted paper products: I loved it. After discovering they had an off-menu “all you care to eat” option, I combined this fact with my unnatural and demonic love of their Italian dressing packets.

I almost always ordered plain pasta as well as packets of the Italian dressing. This caused a lot of confusion. No matter how many times I’d tell the cashier, “I want 2 (or 15, let’s be honest) packets, and please charge me for each,” most of them would confusedly stutter and stammer. Most had to turn to a manager who would stop running and sweating long enough to explain to them that there was a single packet charge. More amusingly, watching them math out the complexities of 25 cents X a number often took several tries. As you can guess based on my previous stories, I would sometimes tell them, “I want 20 packets of dressing.” They would turn to no one in particular and holler, “CAN I sell 20 packets?” It was an infinite series of amusements. It was a sight to behold, watching as multiple people asked me to repeat myself: “Do you really want 25? We’re going to have to charge you? How much is that? OMG, that’s too many!”

Later, they increased the price per packet, undoubtedly in retaliation for idiots like me. It was common for them to forget to give me the packets, even after I paid for them. No one enjoyed returning to the counter and waiting impatiently while our congealed food products sat on the lonely table behind us. That is part of what surprised me about them offering an all-you-can-eat option. There were a few customers who made them regret that offer.

If you’re wondering if I used all those packets? Yes. If I had any left, I would take them home. While in the restaurant, though, I’d also use the dressing as a dipping sauce for the breadsticks.

I continued this tradition at the other dubious chain The Olive Garden. The dressing was always my favorite. To this day, it is one of the few go-to dressings we buy. Sometimes we buy the light version. It contains 50% less of the industrial additives and petroleum as its full-bodied counterpart. If I don’t request an extra bit of dressing on the side while ‘dining’ at Olive Garden, I barbarically dip the end of my breadstick into the bottom of the translucent salad bowl to find a drip of the Italian dressing there. If I don’t have in my bowl, I sneak over to the next table, distract the people eating there, and quickly dip my breadstick in their bowl.

I love all sorts of things on pasta and macaroni. Salad dressing, Louisiana hot sauce, A-1, raisins, wing sauce, soup, sliced tomatoes, fried goat eyeballs (just kidding on that one, I think), and various other things. Let’s be honest: you can take a look at my physique and easily determine the likelihood that my youth filled itself with truckloads of pasta.

I heard rumors that the Fazoli’s breadsticks had enough butter on them to grease the chassis of a 1968 Ford Thunderbird. Because I was born in Arkansas, my immortality convinced me to be unconcerned with such trivial details. I tend to joke that pepperoni will be listed as my official cause of death. They might add in “Fazoli’s butter” as a secondary cause. I imagine a bit of it is still stuck inside my venous system, ready to cause a grease fire once my cremation starts. I apologize to the Berna family if that happens. Crematoriums are expensive.

As for being the bologna sandwich of Italian food, most of us will admit that bologna sometimes is exactly what we need. Even though it is made of the innards of animals too unlucky to avoid being combined into a giant industrial blender and then pressure-heated into cylindrical tubes, we enjoy it. It’s best not to note what is in it. Having worked in meat plants, I can confirm that most packaged meats are made in a process that will immediately remind you of explosive diarrhea, except at these plants, the result is cooked rapidly.

Regarding the garlic overload, I buy minced, powdered, and various forms of garlic by the bucket. It’s a good thing that garlic pills are used anecdotally to treat high blood pressure. There are times when I return home from being gone and am stunned by the wall of garlic and onion aroma that greets me upon my return. I think my cat is growing a Luigi mustache from breathing so many garlic fumes.

While I loved the cheap offerings of Fazoli’s, I can see why people had issues with it. Restaurants employing younger people invariably run into similar issues with consistency, cleanliness, and risk to one’s health and sanity. As the old joke points out, you get to pick 2 out of 3: quick, good, or cheap – but never all 3.

When you factor in that their food was somewhere on the “microwave meal” range, it’s no surprise. While it might preclude me from getting a security clearance to admit I loved their pasta drowned in packets of Italian dressing, I did.

Unlike all the other fast food places I liked, Fazoli’s never made me sick. Not that I know of. That’s saying something. I’m assuming that they irradiated all their food.

I love reading clever reviews of cheap fast food. If I owned a fast-food chain, I’d print such reviews on my own products to be snarky.

As for the picture, it’s to gratefully acknowledge that Fazoli’s was both good and not good simultaneously, an attribute shared by every single fast-food chain in the United States.

P.S. The title of this post suggests another story I’ve not confessed to!