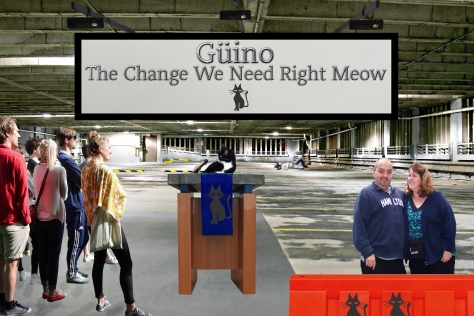 After careful consultation with esteemed political consultants, my wife and I are proud to announce that our cat, Güino, will soon announce his candidacy for political office.

Since he doesn’t talk, he won’t be lying like so many others. Additionally, we can interpret his meows to mean anything that appeals to us – thus solving the biggest problem in politics today.

Finally, Güino has all 9 of his lives remaining and he has pledged to use them all to improve this great country of ours.

Given the shenanigans of the last election, Güino has decided to reach across the aisle (unlike current politicians) and choose a dog to-be-named-later as his Vice President, thus healing the divide of this country.

Please remit funds for his candidacy to your local Humane Society.

I think I’m fixated on food: when I taught the children how to tie their shoes, I demonstrated the garlic knot.

As I walked the winding decline of the parking deck, I felt as if I were being watched by a dozen pairs of unseen eyes. When I had walked down to the next level I realized my error. Above the steps going both up and down was a sign: “STARES ONLY.”