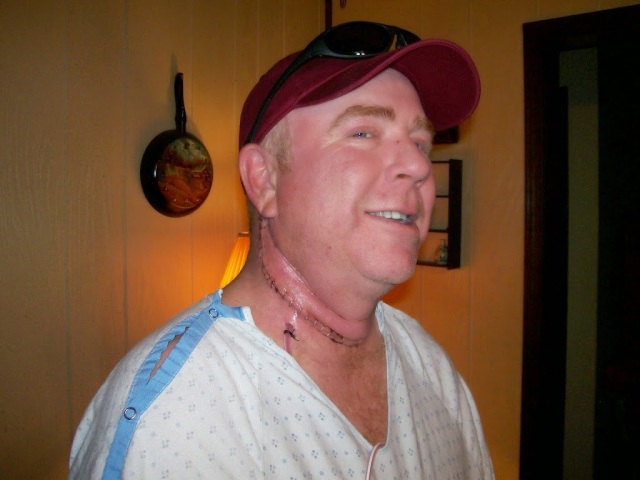 Enough time has passed since Jimmy died for me to remember the goofiness more than the anguish of cancer that he endured. It’s natural that death works that way, as he was alive and kicking for much longer than he was suffering. There are still those days when I catch myself wondering what Jimmy might make of something or I half-expect him to drive up to the house after getting more stuff for his hoard from a local garage sale.

Fair or not, a lot of Jimmy’s energy was siphoned away by his one family member’s obsession with money and getting what she thought was hers. It was a travesty and I learned a lot from it, whether I wanted to or not. It angered Jimmy that he was being punished with cancer. Had he survived and not relapsed, I think he might have begun to feel pity for his family member again, as she was at the whim of her own addictions and demons – and he could see it.

The above picture is one which my cousin Jimmy insisted I take of him. It was immediately after his first cancer surgery. We were at his mom’s house. (My Aunt Ardith.) As you can see, Jimmy was still smiling and laughing. His mom wasn’t too thrilled with our brand of humor. Our custom was to make the most outrageous, tasteless and macabre statements that we could imagine. Between the two of us, we used to come up with some epic craziness. Aunt Ardith would sit in her perch on the couch next to the sliding glass doors, drinking her whiskey and coke, smoking, and feigning surprise and mirth at some of our goofiness. We had the ability to literally say anything to each other or about each other, directly, without fear of anger.

Jimmy was very confident that he was going to beat cancer. When this picture was taken, I was very hopeful. Realistically hopeful, I thought. Jimmy joked that this picture would make an ideal Christmas card. His mom specifically told me that I had better not make cards with the picture on it. (My reputation for doing that sort of thing was quite well known…) Jimmy then chimed in that it would make an ideal “All I got was this lousy bout of cancer” t-shirt. It’s still funny, although with a slightly different twist to it now.

The plan was going to be to post this picture on Facebook after-the-fact. Jimmy was interested in being able to talk to people about his experiences. As a well-liked employee of Budweiser, he knew a lot of people and would have a lot of opportunities to talk to people. Unfortunately, his cancer came back to take him down.

This picture might as well have been taken in another century. It both seems like both yesterday and ten years ago simultaneously. His mom became ill and died a few short months before him after he relapsed. His mom’s house is sold to strangers and Jimmy’s life is fading in everyone’s collective consciousness.When Jimmy died, I had tried to get people to write anecdotes and stories to share with me. I had made a commitment to share them out in the world in such a way as to attempt to keep those memories alive. I did my best to disseminate his pictures to friends and family, sharing them on public drives and makings disks, printed copies and any other method I could think of. We all have our stories and moments to remember with Jimmy. Some of us have a strong collection of memories, many of which were times that weren’t fun while we were living them but are as much a part of his life as the “good” times. As time slides past us, our stories will slide into the fog with us.

Whether it is wrong to say so or not, Jimmy’s death affected me in countless more ways than my own mother’s death did. I was with Jimmy for much of his final time and was with him when he finally had nothing left with which to fight. He weighed so little that it seemed only his soul remained in him.

Not only were we contemporaries, but we shared a common bond of ridiculous attitude toward many of life’s idiocies. We were both forged in a family where laughter could be replaced by drunken rage without notice. My youth was fuller thanks to Jimmy and his parents, even when the times weren’t so good.

Jimmy’s life was one of potential. His younger years were full of missteps and mistakes. (Isn’t that true of all of us, though?)  It would have been interesting to see what he would have made of his promotion at Budweiser, of his relationship with his girlfriend (and then wife) before his passing, or of his new appreciation for the scarcity of life. Had cancer not kicked him, I think he would have been one of those people who would have flourished with another lease on life. His laugh would have been a beacon to people and his youthful impatience would have dissipated. 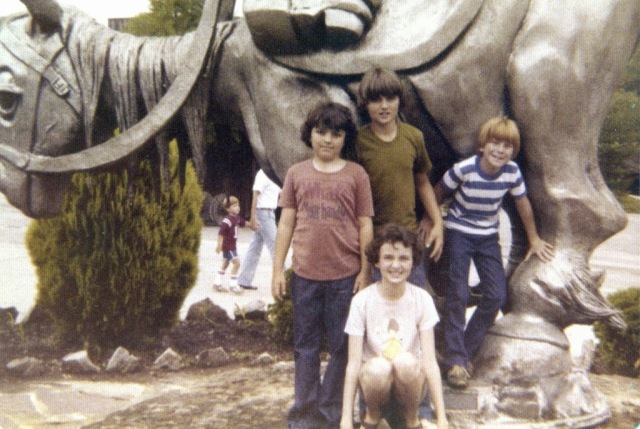 If you’re interested, you can find a few more stories about my cousin Jimmy on this blog by using the “Category” drop-down menu on the right-hand side of the main blog page.
Here’s one: A Reminder…   and An Unfinished Blog Post.