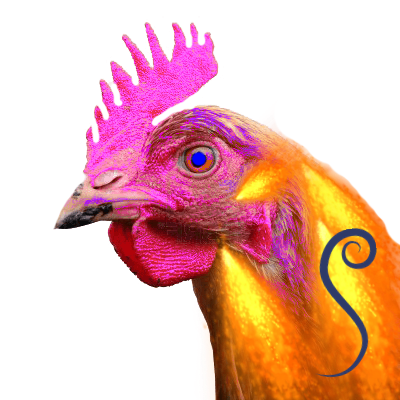 My apologies to Springdale residents. Satire is my friend. You should all know that NATO is about to declare war on the city logo.

I still hate the waffle-fry logo. The Explore Springdale variant, however, is awesome. Seriously. I love it. It’s simple and the symbolism is obvious. I might be biased, though, with a name like “X.” I’ve noted that many people happily insist that it’s my name due to illiteracy.

Each time I see the official logo, I wonder, “Why are we being punished?” It’s no accident that Kleenex offered to be our Official Sponsor in 2017.

I can’t prove it, but I suspect that the logo itself will soon be featured in some crime documentary. The demented subject of same will be shown on camera, his hair matted with chicken feathers, insisting “That darned logo made me do it.” Defense lawyers will start calling it the ‘Waffle Logo Defense.’ Even the guy from “Making a Murderer” won’t comment in case it causes him to receive a longer prison sentence.

I’ve resisted using the logo as an excuse to play blind man’s tic-tac-toe on the municipal vehicles afflicted with the logo. Or “no-go,” as the case may be. I do have a case of rainbow markers ready for when my willpower diminishes. The prosecutor* told me it’s just a misdemeanor to deface the logos on city vehicles. Also, while I will have to do community service, they will also give me a city beautification award if I manage to discolor enough of the logos to make Springdale residents happier by seeing fewer of them.

*This post does not advocate defacing city property. In my defense, though, if the property in question displays an official Springdale logo, it’s already quite defaced.

“Beauty Spits In The Eye of the Beholder” springs to mind when I see the logo. “We Lost A Bet” is my second thought, followed closely by, “LSD Is Your Friend.” A friend of mine suggested “A Chicken In Every Pothole.” That last part is humor, by the way. The streets and roads are nicely maintained, in my opinion. But if you drive a convertible, it’s no joke to pass or get behind a chicken truck. It’s my hope that some of the yokels figure out that the new bike lanes aren’t just really small third lanes, too. The screaming is getting fairly loud during peak hours.

We all agree that the logo, Ray Doton’s cowboy hat, and the mayor’s hairstyle are the three biggest hurdles facing Springdale. (The mayor as an administrator is doing a great job, though.) The city itself is awesome unless you live on the East side, in which case your GPS is permanently linked to the destination marked “Elsewhere.” Many people don’t know that we now hold the demolition derby on this side of town during normal traffic hours. So far, no one has noticed.

I would post the city logo here again. The last time I downloaded it, however, I got flagged by Facebook for promoting violence and for displaying graphic imagery. Just imagine that five drunken people got into a fight while playing pixie sticks and then became ill on top of the scattered sticks. It’s a pretty accurate rendering of the logo.

I’m biased, though. I like nice things and beauty, no matter what conclusions you might draw by looking at my face.

I’ve made several versions of logos through the years, some seriously intentional and most stupidly satirical, much like my outlook on life.

In case anyone missed it, I think Springdale is a great city, one making tremendous strides as it leaves behind its past.

That logo, though? I think the guy from Key and Peele is going to make a horror movie based on that thing if we’re not careful.
.

See comments for examples of the logos. The chicken in this post is one I created. Please note that I wasn’t chained to expectations such as professionalism, common sense, or attention to detail.
.

Here’s the official logo for Springdale. I apologize for the use of obscenity.

Here’s on my simple ones. Boring? Yes. But not terrible.

Here’s the Explore Springdale variant. Note that you don’t want to hurl like a high school partier when you look at it?

Here’s the “George Clooney” of logos. Its beauty is unrivaled.