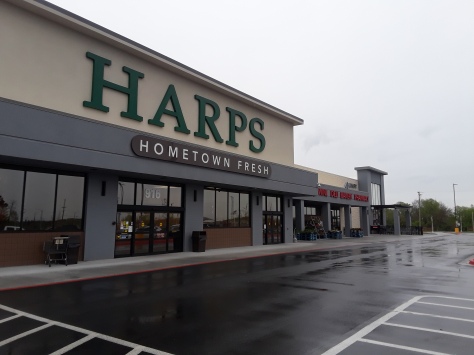 After our food misadventure on Saturday, my wife and I or my wife and me (depending on whether anyone cares about grammar) whimsically decided to go find the new Harps Food Store in Lowell, the one by Goad Springs Road and Monroe Street. The weather was cold, rainy, and windy; since we survived a visit to one of our “Never Again” eateries, we were feeling adventurous.

The newest Harps is over by the incredible trail system and the nice Workman’s Plaza. (The section of trail on both sides of this location is among my favorites of the entire trail system.)

Upon our exit, we decided to ask that Harps demolish the location in East Springdale and build a replica of the Harps in Lowell. I’m not sure if we were feeling envious or jealous.

For those of you with youth still in your eyes, you should know that finding a great grocery store is right up there with winning the lottery or being able to reach that itchy spot on one’s back.

Dawn even found her much beloved sugar-free Tampico mango punch, a drink I got her addicted to a few months ago. A gallon of it costs less than a regular soft drink and tastes delicious. We walked around this new store, making faces of astonishment and saying ‘Aha!’ with each new discovery. Due to our visit, I even grilled yesterday in the afternoon typhoon. The selections were too good to pass up.

Since our move from one side of Springdale to the other, we’ve missed the Gutensohn Harps. It’s part of the reason we are afflicted with the diabolical Walmart Market on our side of town, the one dedicated to destroying people’s hopes and dreams.

The difference between this new Harps and the one in East Springdale is astronomical, both for presentation and inventory. The fresh salad bar almost made me openly weep. After falling in love with the Kroger Superstore in Hot Springs last year, I’m more likely to cry in a great supermarket than just about anywhere else.

I know it’s unfair, but I’m going to have to ask Harps to demolish the store by my house and build one like the Lowell location. Anything short of that will be a modern tragedy.

Also, the new Harps has a great selection of beer and wine. It’s strange that our East Springdale location doesn’t have it because it’s just plain science that those of us on this side of town have more motivation to drink ourselves into a stupor.

Note: someone wrote to me on social media to say that the East Springdale location doesn’t offer alcohol due to an agreement with a liquor store on the edge of the property.  That was probably the best decision at the time – but is no longer a good strategy. Some people, especially the older demographic of the store’s base, feel a stigma regarding liquor stores. Moving the store slightly would allow Harp’s to build a new store, one with all the amenities in one location. As much as some people despise Walmart Market, having alcohol available tilts the scales for Walmart; otherwise, people have to make two stops, which lessens the benefit of Harps being so much easier to get in and out of compared to the bigger grocery stores.

One of the best things Harps ever did was to rebuild the Gutensohn location in Springdale. I’ll never forget the last remodel or how fascinated I was by the upgrade. The time has come to do the same for East Springdale. While I don’t have access to the profitabillity for the store in East Springdale, I assume by customer volume that it’s underperforming compared to the population density of the area. When I moved from my previous house in another part of Springdale, I knew in advance that I was going to regret it in part due to the lack of an amazing Harps in East Springdale.

If Harps builds a store comparable to the new location in Lowell, I would consider doing all my grocery shopping at the new location, as well a much higher quantity of  ‘on-demand’ shopping for lunch and quick meals. I’ve heard many of my neighbors say the same thing.

I also want to clarify that I have seldom had issues with rudeness from Harps employees, unlike the behavior I’ve suffered from Walmart Market across the street. Even when I encountered a malfunctioning pump that bathed me in gasoline or encountered critically out-of-date refrigerated products, Harps didn’t argue with the the details; they simply wanted to fix the problem. Also, Harps doesn’t have self-serve registers, something that seems stupidly obvious to everyone except Walmart.

Harps is the grocery store I want to flourish, for a variety of reasons. But Harps is continuing to the lose the grocery battle over in my neighborhood. They’re losing for no justifiable reason, too.

Please bring your bulldozer over and fix the one in East Springdale.