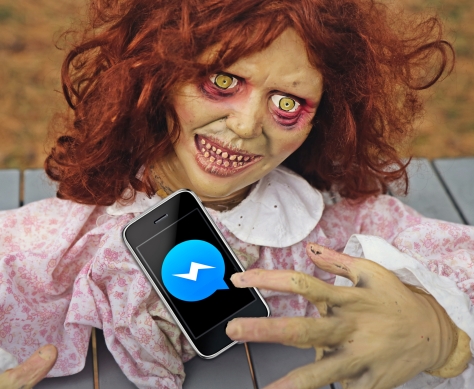 Apparently, many Facebook users are unaware that they can easily block messages from a person WITHOUT also blocking them on Facebook.

Think of it as being able to go out and meet a friend without worrying about them calling you at midnight – or when their cat needs a taxi. Because they can’t. That’s how blocking on Messenger works. You choose. You don’t have to rip your phone out of the wall if you’re not giving people your phone number to call you.

Let’s face it, we all have a few friends who can’t resist sending the modern equivalent of chain emails via Messenger. They probably need to read the directions for a box of toothpicks. They just can’t help it. You can’t change them. Others, for whatever reason, seem to be prone to sending viruses to us, or getting hacked/cloned and sending malicious links with titles such as “Video Of You I Found!” or something politically charged like “Obama Killed Your Grandfather” to grab our attention and make us click the link before we turn on our brains.

Sidenote: for those of you who don’t know, it is always wise to start a new Messenger chat by using personal words that inform the recipient that it is from a ‘real’ person, rather than a bot or hacker. Something like, “Hey, this is X. I really like the idea of you wearing a sweater made of pink insulation” will do nicely.

There’s no reason you can’t use Messenger safely. It’s no different than being friends with crazy people. You don’t just yank open your mailbox without listening for a timer in there. Instead of throwing the baby out with the rose-scented bathwater, I suggest a more reasonable approach: block each offender as they send you nonsense, instead of punishing yourself and all your other friends. Get a suspicious message? Get 2,652 gifs that would give anyone a migraine or cause convulsions upon viewing them? Block the person who sent it.

I don’t know how many crazy and clueless friends you have, but I think it would take less time to block each person as they behave stupidly than it would to misuse the incredible communication platform that works on almost any platform or device, from anywhere in the world. We have our problems with social media, to be sure, but most of the consequences are our own fault, precisely because we aren’t using them as intended.

I could be wrong – but it seems like you might be over-reacting or not thinking clearly about how you’re dealing with this.

If you post “Stop sending me stupid messages on Messenger!” the idiots are not going to realize it is them you are referring to. That’s what being stupid does to us. It explains voting, comb-overs, and wearing tight clothing. They don’t get it. Stop preaching to everyone. Target each offender when they send you a message. It only takes once, and you’re done.

P.S. You can use Facebook to private message someone without using Messenger. All you need to do is post and set the privacy control to that specific person. Only that person will be able to see.