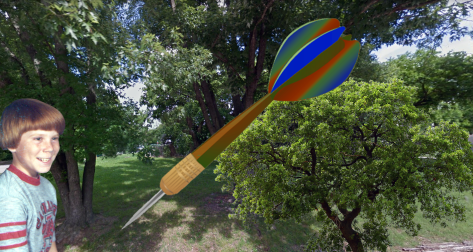 Years before the interstate crossed western Springdale, my cousin owned a big chunk of land where the Springdale Convention Center, Denny’s, and La Quinta now stand. (Little did he know how valuable his land would one day become.) He had one of the region’s largest machine shops there. (If such things matter for the story, he technically was ‘the husband of a 1st cousin 1x removed.’)

Along the road, his parents, Goldie and Ellis, owned a house, followed by a trailer and another little house further down. Pasture framed the property in a large “L.” Like much of the area, it was rural and Highway 412 was a slender ribbon known as 68. 48th Street cut across the highway, uninterrupted by the interstate like it is now. It’s interesting that Springdale is now reconnecting across that area with Gene George Blvd. On our side of the highway, 48th Street was a narrow road to almost nowhere. Close to the road stood several massive oak trees, a couple of them towering high about the landscape. There were pear and apple trees dotted all over the property, as well as a couple of walnut and pecan trees, one of which almost literally killed me, but not for the reason you might imagine. That’s a story for another day. My cousin Jimmy and I both narrowly avoided being blinded near there, which is also a story for another day. My family lived in two trailers and a very small house on the property.

I don’t remember how we ended up in the jon boat sitting in the grass near the trees in front of Goldie’s garage building. It was there for a while, so you had to careful about jumping into it without inspection. Otherwise, you might find yourself jumping right back out with a snake or other critter attached to you.

My cousin Jimmy found a few large darts somewhere. Time has stolen the details about where they originated. While they weren’t the infamous lawn darts that came later, they were larger than standard throwing darts that we’ve all tossed and hit the wall accidentally with, even as we tried to conceal our errant misses.

More than once, I said, “Watch out with those darts, Jimmy!” He was younger than me. He was also was protected by a strange force field of superiority. He was almost Kevin Costner untouchable. Jimmy laughed and threw another one with even more recklessness. It thudded into the wood bottom of the boat. “Darn it, Jimmy, you better not hit me!”

Jimmy stepped several steps further back and, without pausing, launched the heavy dart high into the air, in a long parabola of unknown destination. Naturally, I did the only thing possible: I covered my head and winced. I doubt Jimmy expected me to duck.

It turns out I didn’t need to concern myself with being hit in the head with the dart.

It landed directly on the top of my foot, impaling my left foot almost all the way through. I had a Jim Carrey moment, one in which I stared at the heavy dart impaled in my foot. My brain was taking a bit of a break to process this.

Jimmy’s face made an absurdly round “O” as his mouth fell open, as I writed a little bit in agony.

For once, I believed he didn’t intentionally do the thing that just happened. That is what happens when you indiscriminately toss heavy darts above people’s heads, though. That’s a helpful note if you find yourself indiscriminately tossing darts high into the air around other people.

All at once, the pain of the large dart being stuck through my foot reached my brain and I screamed like someone put a firecracker in my open mouth.

Jimmy ran away, already hollering that I was beating him, when in reality I was sitting in the boat with a dart stuck in my foot. I pulled it out without thinking very long about it. It took several seconds for the hole to begin oozing blood. I did not run after him. For the time being, I didn’t care if he had season passes to Dogpatch and free ice cream for me.

After several minutes, I hobbled around the trailer on the backside and tried to go inside. “You better not get blood in here, you little sh!t,” Mom told me between puffs on her cigarette. I went back outside and around to the front of the trailer. Dad was sitting there with Uncle Buck.

My Dad, often the comedian, yelled “Bullseye!” at me. I assumed Jimmy finally admitted he threw a dart into my foot. I still didn’t see Jimmy.

Uncle Buck, in the role of a caring human being, told me to wash the wound out.

“Nonsense,” Dad opined. “Put some ash on it.” Dad unsteadily stood up and with his drunken swagger approached me. He grabbed charcoal out of the burn pile and motioned for me to approach. He smashed it in his fist and rubbed it on top of my foot. I stood perfectly still, hoping his attention would shift so that I could get away. I knew better than to flinch or cry. “Bullseye,” Dad repeated and laughed.

I hobbled away. I found Jimmy a few minutes later sitting on a low branch of one of the apple trees between Goldie’s house and the rear of the machine shop. I didn’t hit him. He was Jimmy – and Jimmy did only what Jimmy did best. I think he found it difficult to relax if I had a dart in my hand, though.