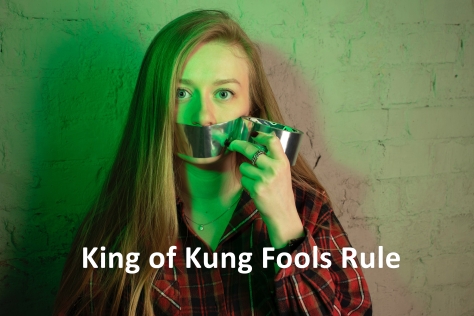 The King of Kung Fools Rule: once you ask that someone leave you alone and not communicate with you, total silence is the only option. If you engage, you will be bogged down in a perpetual fight wherein you’ll be held into a perpetual account for exercising your right to be free of someone.

If you’re reading this, you should think of Carly Simon: “I bet you think this song is about you.” It’s not. It’s about me and about the lesson I have to learn over and over.

We watch in society as people with protective orders still deal with the people tormenting them. It’s incredible it requires that. Pathology drives people to ignore the wishes of other adults.

Despite what people at a distance from me might think, I’m a bigger fan of snark, wit, and pithiness than you’d imagine.

I don’t care what you have to say or what motivates you. If I’ve asked you to stop communicating with me, you can be sure that you’ve done or said something (or many things) that brought me to the decision. Even if I decided on the spur of the moment, it is still my right to do so.

Even though I’ve been on both sides of this issue when I was younger, I’ve learned repeatedly that when someone says, “Leave me alone,” you should leave them alone. No matter how you’re connected, whether you’re related, past friends, or any other relationship, real or imagined, when someone says “No,” it means “no.” Regardless of your past connection, an adult has the right to say “Enough is enough,” if not, “I’ll let you know when I’m ready.” Forcing a conversation when it is unwelcome is aggressive and indicates that you don’t understand that each person has the right to choose who, what, when, how, and where regarding their lives. Who they permit to interact with them is entirely their choice and not subject to veto.

Manipulators and abusers insist they have a right because of __________. (Fill in the blank with the most common nonsense abusers mention.) This insistence indicates either immaturity, anger, or pathological tendencies on their part. Do not engage further. No matter what explanation you provide, it won’t be good enough. They will move the goalposts, gaslight you, or avail themselves to the tactics that all manipulators attempt. The worst will misbehave by saying or doing things to provoke a reaction. These actions will escalate to horrific levels if you acknowledge them. Being kind to them won’t work. Being mean to them won’t work. Their insistence to have access to you is a warning sign that they need help.

Have I mentioned how terribly I have failed to follow my own realizations listed above? I am an expert in falling into the holes I’ve dug for myself.

If you do engage, they’ll eventually succeed in making you respond with anger. They’ll then triumphantly screech in mock horror (and glee) that you got angry. Your anger at their stupidity is normal. It’s a superpower to be able to ignore abuse like that.

My Mother was a Kung Fool like no other.

At each stage of my life that I exerted control, she’d enlist any available family member to guilt me into reconnecting. My love for her sometimes interfered. It was a long, exhausting cycle. Not too long before she died, I finally broke the bond. I’d had enough. I mean, really enough, not the ‘enough’ of ‘maybe I’ll change my mind later’ enough. I only talked to her again because my Aunt Barbara called me and told me she had stage 4 cancer. Even then, I felt like I violated every protective mechanism I had in place. This was especially true because I had another family that convinced me he was going to kill me. In my family, that sort of thing is discounted at your own peril.

Addressing the other common refrain: you’ll be called crazy, a liar, or heartless. (Or some other word you can find it an Abusers Thesaurus.) IF the other person is correct and I am demanding to be left alone because I’m mentally ill, irrational, or simply hateful, it still doesn’t change the fact that I’ve demanded to be left alone. IF you insist on continuing the attempt anyway, you become the problem. If I’m spouting off nonsense, let me continue to do so and the truth will find me. Even Obama made famous a saying to let fools do their own talking.

If you can’t let me, you’re afraid of my message and that becomes obvious to people watching.

If you’re the abuser or troll, once the word “Stop” or its equivalent reaches you, stop. If you can’t get help, because you have control and anger issues that need to be addressed.

So, again, I don’t want to hear from you.