I see or hear people say, “Those drivers in so-and-so! What idiots.” Or, “People in so-and-so are so mean!” Because it’s a sentiment commonly seen and heard, it doesn’t sound that odd to most people. Most of us have our own particular ‘there’ in mind. I recommend that you imagine Dallas on a Friday afternoon, or the DMV between 7 a.m. and 5 p.m., anywhere in the United States.

There are exceptions, of course, but in general, people are similar regardless of geography. Southerners are no more polite than those from Wyoming and drivers in Arkansas are no less idiotic than those in Pennsylvania. (Except for Josh. He really stinks.)

Most of the time, the grouchy people in question have traveled with their own geographical prejudices. If you listen closely, it becomes more apparent than ever that there is as much fault in the observer as the observed.

Anyone can pinpoint a particular place and time, inhabited by a shifting mix of people and situations and say, “Well, this case is different because of so-and-so…”

This particular scenario occurs in every nook and cranny of this country, each and every day. No travel is required to see and hear people behaving poorly.

“Those” people there, wherever there is, are no different than you or the people who live around you.

“They” see us and shake their heads at us and our impolite stupidity and our inability to drive in a straight line without flipping our vehicle upside down – while parked.

The circle of complaint is eternal, each of us pointing to those idiots elsewhere.

Even though we’re all the same, each of us struggling to minimize just how much stupidity we individually generate.

The struggle is real. 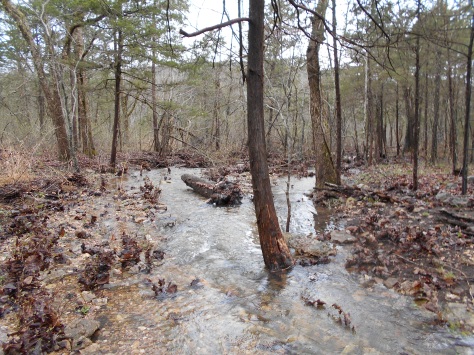 My wife and I spent the last couple of days at our favorite cabins at Wisteria Lane. Much to our delight, the impending torrential rains waited until our arrival to unleash. Most people prefer the serenity of calm weather, but not us. There is no better place to be when the rain falls and the creek roars below the expansive front deck, adorned with the grill and porch swing.

The creek below our cabin rose as high as I’ve ever seen it, re-routing the bottom of the valley, with the creek widening to 25 feet at one point. I didn’t get any pictures of the stream at its widest, as the winds were howling and the rain was blowing up and down, in and out, and washing anything which ventured outside far enough to see it. But the volume was a delight to fall asleep to.

The next morning, I of course ventured out into the mess wearing flip-flops. I even climbed onto the fallen tree over the receding creek and traversed it. Dawn, of course, was playing different versions of “What Could Possibly Go Wrong,” in her mind while I was enjoying the frigid water turning my toes into little icicles. I managed to turn over an older tree without falling in the water.

My wife, being female, wasn’t keen on having her picture taken 47 times, but she took mine at least that many. I didn’t care how I looked, being intent on setting a new world record for eating “all the things” in the cabin. I failed in that quest but succeeded in enjoying being in the midst of nothing. Dawn, who usually ignores my crazy notes on the cabin’s welcome board, joined in a little this time, while I made all manner of quips, including one for my friend who hates the phrase, “at the end of the day.”

At the end of this day, though, I can only hope that most of you enjoyed a time comparable to the one I had this weekend.